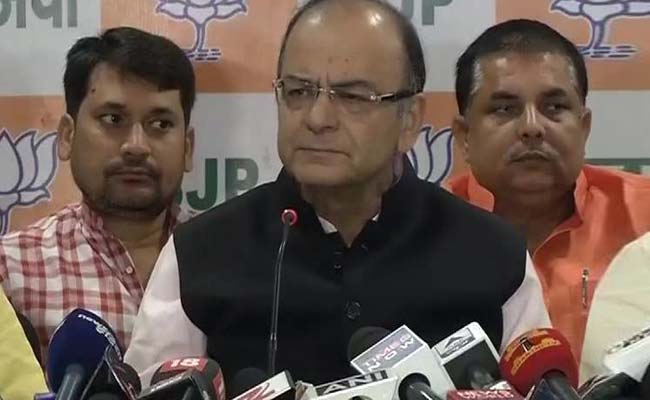 Patna: As eminent scientist PM Bhargava announced that he would return his Padma Bhushan award, making common cause with dozens of writers, artists and filmmakers returning their awards in protest against "rising intolerance", Finance Minister Arun Jaitley said that "manufactured rebellion" is growing.

"First writers, then filmmakers, now biologist...do you see this as a chain reaction. I had already called it manufactured rebellion...I stand by my phrase and I think the events as they are unfolding only indicate that that kind of manufacturing is growing at a faster speed," Mr Jaitley said.

The senior minister's comments come at a time filmmakers have also joined the protest that has become popular on social media as #AwardWapsi.

Mr Jaitley said those returning their awards were "rabid anti-BJP elements," some of whom had gone to Varanasi - Prime Minister Narendra Modi's constituency - to campaign.

"The fact that (the protest) has been stepped up in the middle of the Bihar election I'm now constrained to say that this is electioneering by other means," he said.

Over 40 writers have returned their Sahitya Akademi awards or quit their posts expressing anger at attacks on rationalists and recent mob killings over beef or cow slaughter.

Yesterday, 10 filmmakers including Anand Patwardhan and Dibakar Banerjee said they would return their national awards as diversity and freedom of speech are "under threat".

Scientist PM Bhargava, who was the founder-director of the Centre for Cellular and Molecular Biology, said: "The fear as we see in democracy today... the spread of Hindutva... I believe that (religion) really is a personal matter. It should not make incursions into politics as it is doing now."

The 87-year-old has said he will meet the home secretary and return the Padma Bhushan, which is one of India's top civilian awards. He is one of the scientists who started an online petition on Tuesday signed by at least 100 senior scientists, urging President Pranab Mukherjee to step in against growing intolerance.