Mamata Banerjee spent a night without food in a huge showdown with the centre over an investigation for which CBI wanted to question Kolkata police chief Rajeev Kumar.

Mamata Banerjee's supporters says she is veteran at long-haul protests.

As Mamata Banerjee protests in the heart of Kolkata near the Metro Channel station, sitting, pacing, consulting and resting on a stage with a chair, it is a throwback to the agitation that catapulted her to the post of Bengal Chief Minister. The 64-year-old has returned to the same spot where she held the protest that enabled her campaign to end the 34-year Left rule in Bengal.

As she paced furiously on the stage built at Metro Channel in the colours of the flag, wearing her trademark white sari and a light shawl, reporters and others saw a glimmer of Mamata Banerjee the consummate street protester.

It had been building up for days. As the country heads to the national election, the turf war in Bengal has intensified with the BJP seen to be making inroads in the state. The CBI's attempt to question police chief Rajeev Kumar - described by Mamata Banerjee as one of the world's best officers - last evening in two Ponzi scams provided the trigger. Around 8.30 pm on Sunday, a tent had been put up and the stage set for Mamata Banerjee's "indefinite satyagraha".

Many opposition leaders have come out in support of the protest and if it gains momentum, Mamata Banerjee's CV for the country's top post might look a little more appealing. 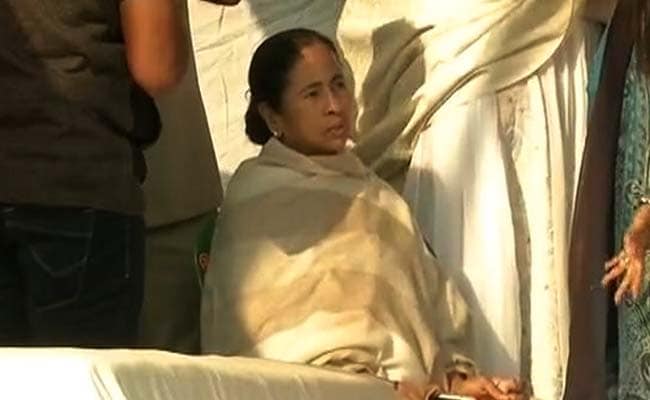 Mamata Banerjee was seen in her trademark white sari and a light shawl on the stage.

Facing an aggressive campaign by the BJP and its president Amit Shah to win over Bengal, the Trinamool hopes to mobilise enough support for its "satyagraha" to survive the turf war.

Early this morning, she took a break and returned shortly afterwards, all traces of fatigue gone, ready for day 2 of a protest that could stretch to days.

But the Trinamool leader's supporters said she is a veteran at long-haul protests. "She has the stamina and she knows how to pace herself," said a leader, watching her pacing furiously on the stage for the day's "morning walk".

Mamata Banerjee is known to be particular about fitness and is believed to use the treadmill everyday.