The Governor responded, tweeting: "I find no substance in her version, both in fact and law" and also indicating that a fresh chapter will be written in this face-off, saying: "Reply will be sent as her letter has content to which I cannot subscribe"

The gloves came off again on Saturday in the long-running letter war between the Bengal Chief Minister and the Bengal Governor, with Mamata Banerjee writing a 13-page, sarcasm-filled letter to Mr Jagdeep Dhankar; it also consists of some annexures but these have not been made public. His last letter to her was 14 pages long.

Referring to the Governor's letter of April 23 and 24, Ms Banerjee said "... communications of such content, tenor and tone... are unprecedented in the annals of constitutional history" and accused Mr Dhankar of using language that "even with maximum restraint, can only be described as vituperative, intemperate, intimidating, abusive and insulting".

"When I read your two letters, and many earlier ones as well, I felt more sad than angry. My second emotion was one of amusement," Mamata Banerjee wrotee, listing Mr Dhankar's "choicest epithets".

"I list my favourite ones, verbatim taken from you: ... like loose cannons in public domain; driven by external script; theatrics and politicking, law unto oneself... bravado mode of collision... but respected Governor, preaching without practice and sermonising while violating, does not behove you or your office," she added.

The Governor responded, tweeting "I find no substance in her version, both in fact and law". He also indicated a fresh chapter would be written in this face-off, saying, "Reply will be sent as her letter has content to which I cannot subscribe as it eclipses essence of constitution".

No time to bicker. There are no sane takers for this unseemly scenario.

I have held enough close to my chest- looks like revealing is becoming unavoidable.

Reply will be sent as her letter has content to which I cannot subscribe as it eclipses essence of constitution. (3/3)

Mr Dhankar, however, also sought to play down the confrontation slightly given the coronavirus crisis, saying this was "no time to bicker" and calling on the Chief Minister to "focus on the grim situation and work in togetherness".

Earlier this week Mr Dhankar, in the second of a two-letter retort, accused Ms Banerjee of trying to cover up "monumental failures". He attacked the Chief Minister over what he called diversionary tactics and appeasement politics.

Ms Banerjee responded with a five-page letter reminding the Governor she was elected head of state and he was only nominated - a point she underlined in her second letter.

The Chief Minister quoted from three Supreme Court judgments to underline Mr Dhankar's status, pointing to a 2016 ruling in which the top court said "... not within the realm of the Governor to embroil himself in any political thicket. Governor must remain aloof from any disagreement, discord, disharmony... within individual political parties... Governor must keep clear of horse-trading".

At the end of the pointed letter Ms Banerjee told Mr Dhankar, in no uncertain terms, that he had limited powers to bring about any change and urged him to act "politely". 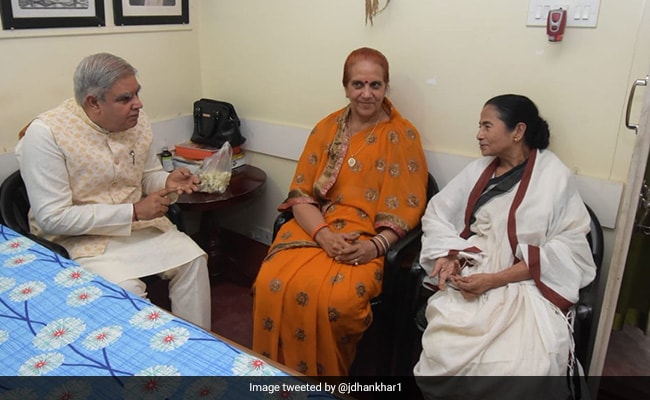 "In a nutshell... if you do not agree with my government... you may politely bring your grievance to my attention... if it still not resolved to your satisfaction, there is, unfortunately, no other power in you, so long as my government commands the confidence of the legislature," she said.

"Truth is always bitter but that is the constitutional truth," Ms Banerjee wrote.

The Chief Minister also urged the Governor to "desist from intensifying your efforts to usurp powers, especially during the humongous crisis which the nation and West Bengal are grappling with".

Bengal has reported around 800 COVID-19 cases and 33 deaths so far but the figures have been questioned by the Governor.

Across the country over 38,000 have been infected and 1,218 killed. The nationwide lockdown to break the chain of transmission, scheduled to end on Sunday, has been extended by two weeks.