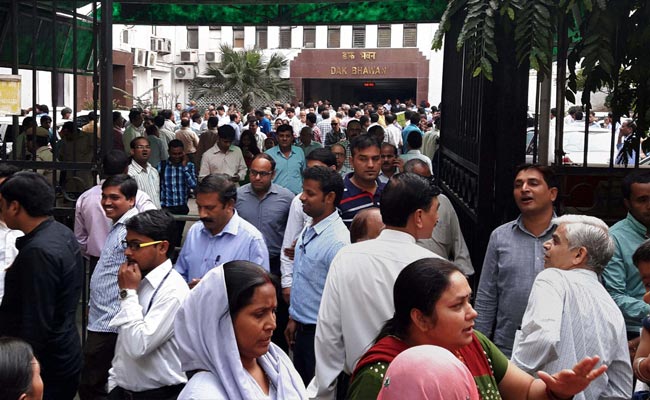 People come out from Dak Bhavan after Earthquakes occurred in New Delhi on Monday, October 26, 2015. (Press Trust of India photo)

Jaipur: An earthquake with its epicentre in Afghanistan jolted Rajasthan today, forcing people to run out of their houses and offices.

The temblor, at 2.43 pm, lasted for nearly a minute, prompting residents living in high rise apartments to scramble for safety.

"We felt the tremors. I was on my chair, and suddenly it started shaking. I rushed out," said Ashish Pandey, an executive in an office on the fourth floor of a mall in Jaipur.

Abhishek Singh, who lives on the sixth floor in a high rise building in Tilak Nagar in Jaipur, was having lunch when the ground shook.

"Suddenly I felt things were shaking... I saw people living in my apartment building rushing out and realised it was an earthquake," he told IANS.

"We don't wish to go back to our flats right now," he added.

Jaipur Metro stopped its services for 10 minutes, officials said. The quake was also felt in other parts of Rajasthan.