A Welcome Gate For Xi Studded With 18 Types Of Organic Fruits, Vegetables 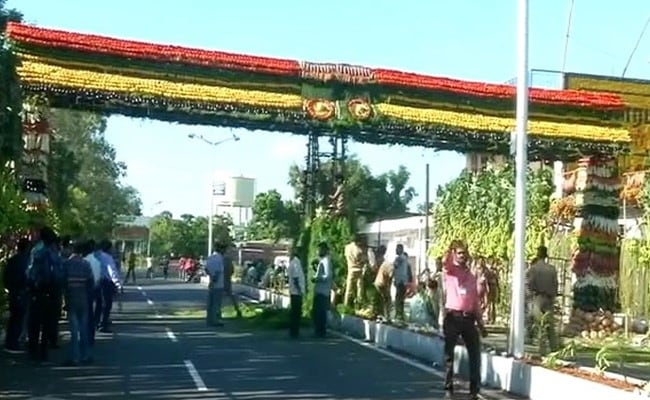 All vegetables are organic and they have been directly brought from the farms.

As Mamallapuram prepares for a grand welcome for Chinese President Xi Jinping, who will arrive in Chennai this afternoon for an informal summit with Prime Minister Narendra Modi, a gate has been decorated near the iconic Pancha Rathas monument using 18 different varieties of vegetables and fruits.

Around 200 staff members and trainees of the Department of Horticulture spent nearly 10 hours to decorate the gate in  Mamallapuram, earlier known as Mahabalipuram, a coastal town about 56 km south of Chennai. Most of the vegetables used to decorate the gate are organic and they have been directly brought from the farms across the state, Tamilvendhan, Additional Director, Department of Horticulture told news agency ANI.

Xi Jinping left for India this morning for the second informal meet with PM Modi in Mahabalipuram. The two world leaders met in Wuhan in April last year for the first informal summit.

They will meet in the evening and hold talks on a host of issues.

The leaders of the world's two most populous countries will have guided tour of three monuments - Arjuna's penance, an intricately carved ancient sculpture, Krishna's Butter Ball - a big round boulder perched on a slope, and Pancha Rathas - a five chariots monument complex.

They will also attend a cultural programme at the Shore Temple. PM Modi will then host a dinner for the Chinese President. The key one-on-one meet between PM Modi and President Xi will take place on Saturday morning.

There's no set agenda for the summit, Foreign Ministry said in a statement. Sources said terrorism, including training, financing and any other support to terror groups, will be one of the key issues to be discussed. Others will be trade, defence and border issues. Sources say both sides are also looking at possible confidence-building measures for the India-China border, which may be announced later.

The historical coastal town - all geared for the key summit - once had ancient maritime links with China during the Pallava dynasty. It was a major port city in the seventh century and served as a gateway for import and export of goods from and to South India and China.