The action was taken against the three properties including My Home, Best Western and a house situated at Bengali in human trafficking and IT Act case. 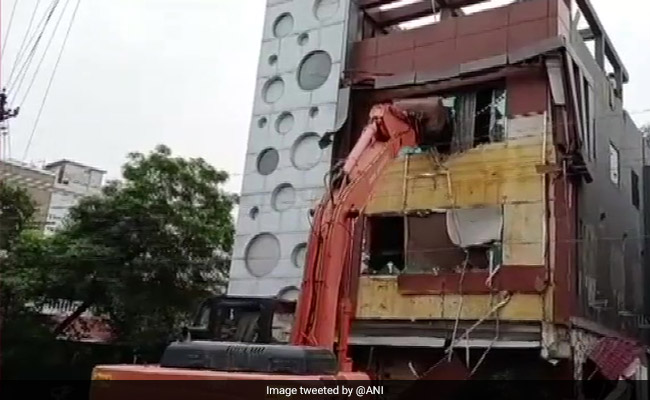 The Indore Municipal Corporation has demolished the three properties of an accused. (ANI)

The Indore Municipal Corporation on Thursday demolished the three properties of the absconding owner of Sanjha Lokswami newspaper Jitu Soni for his alleged involvement in the honey-trap case.

The action was taken against the three properties - My Home, Best Western, and a house situated at Bengali in human trafficking and IT Act case.

Early morning, the corporation's staff with 3 JCB and 1 bulldozer reached "My Home" dance bar located in Geetabhavan and other to properties of Soni.

An FIR was registered against the owner of Sanjha Lokswami newspaper Jitu Soni, his son Amit Soni and others, for their alleged involvement in the Indore honey trap case.

Addressing a press conference in Indore, Senior Superintendent of Police Ruchi Vardhan Mishra had said: "An FIR has been registered against Jitu Soni, his son Amit Soni, manager of ''My Home'' and others under Indian Penal Code Section 370. A case has also been registered against them under the IT Act in connection with the Indore honey trap matter.

Earlier this year, six persons, including five women, were arrested in connection with the case.

It came to light after an Indore Municipal Corporation (IMC) engineer filed a complaint alleging that two women were blackmailing him by threatening to make some objectionable videos viral.

The scandal had rocked the state and snowballed into a political controversy.