Priyanka Gandhi Vadra had visited the famous Mahakaleshwar Temple in Ujjain on Monday and offered prayers before beginning her campaign in Madhya Pradesh.

In a bitter attack on Priyanka Gandhi Vadra, Union Minister Smriti Irani on Thursday said the Congress general secretary offered ''namaz'' in Amethi and then also visited the Mahakaleshwar Temple in Madhya Pradesh, all for votes, amid the ongoing Lok Sabha elections.

"The Congress was so flustered in Amethi that its general secretary, after offering namaz for votes there, now visited the revered Mahakal temple in Madhya Pradesh's Ujjain," Ms Irani said at rally without naming Priyanka Gandhi Vadra, news agency PTI reported.

Ms Irani is contesting this Lok Sabha election against Congress chief Rahul Gandhi from Uttar Pradesh's Amethi, where his sister played a key role in drumming up support for him. In the last general elections, Ms Irani had lost to Mr Gandhi by over one lakh votes.

Priyanka Gandhi Vadra had visited the famous Mahakaleshwar Temple in Ujjain on Monday and offered prayers before beginning her campaign in Madhya Pradesh for the last round of voting on May 19. She had also held a roadshow in Ujjain. 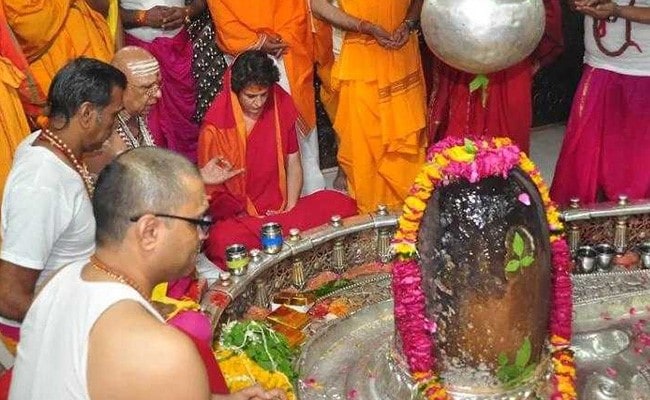 At her rally on Thursday, Ms Irani also accused Rahul Gandhi of lying.

"Before last year's MP (Madhya Pradesh) assembly elections, Rahul Gandhi had promised loan waiver to farmers, but after his party came to power in the state he has betrayed them. Now he is saying that he does not have a magic wand," she said.

Rahul Gandhi, however, in his rallies has maintained that the Congress has fulfilled its flagship promise of farm loan waivers after coming to power in Madhya Pradesh, Chhattisgarh and Rajasthan late last year.

There has been immense interest in Priyanka Gandhi Vadra's political career since she formally took up charge of the eastern half of battleground state Uttar Pradesh earlier this year. Priyanka, the sister of Congress chief Rahul Gandhi, had till then only campaigned for her family members and been an informal advisor to the party.

Bearing a striking resemblance to her grandmother and former Prime Minister Indira Gandhi and mass appeal, Priyanka Gandhi Vadra has helped the Congress steer the focus of the ongoing elections to issues of the economy and employment while also reaching out the poorest sections.