Lok Sabha Polls: Voter Turnout In West Bengal Recorded At 34.87% Till 11AM

Barring a few incidents of violence and EVM failures, polling has been largely peaceful since 7am. Voting will continue till 6 pm. 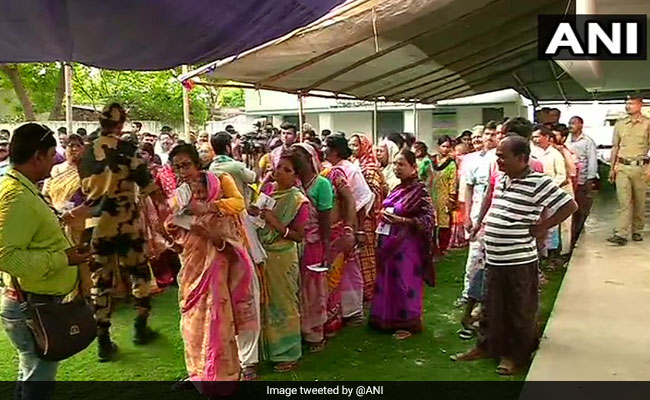 Long queues were seen outside booths in Balurghat, North and South Malda, Jangipur and Mushidabad.

An estimated 34.87 per cent of over 80 lakh electorate exercised their franchise till 11 am in five Lok Sabha constituencies of West Bengal, amid reports of violence from Murshidabad and Balurghat, an election official said.

Long queues could be seen outside the polling booths in Balurghat, North and South Malda, Jangipur and Mushidabad.

Barring a few incidents of violence and EVM failures, polling has been largely peaceful since 7am. Voting will continue till 6 pm.

"Three people were injured in two incidents of bombing in Domkal area and adjoining Tiktikipara in Murshidabad. They have been hospitalised and we have a sought a report on the matter from the district magistrate. No one has been arrested or detained so far," an official said.

A total of 80,23,846 voters are eligible to register their choice at 8,528 polling stations that will decide the fate of 61 candidates.

Altogether 324 companies of central force personnel have been deployed in the state, covering over 92 per cent of the polling stations across the five constituencies.

The CAPF deployment has been the highest in Murshidabad district (96 per cent) followed by Malda (91.4 per cent).

Following the incident, a large number of state police and central force personnel have rushed to the spot.

In Malda North seat, glitches in EVMs were reported at a few polling stations stalling voting for some time.

In Mushidabad's Domkal, husband of a Trinamool Congress counsellor was allegedly beaten up. Members of the state ruling party blamed Congress-backed people for the incident.

The Balurghat constituency is witnessing an intense battle between sitting Trinamool MP Arpita Ghosh, BJP's Sukanta Majumdar and Ranen Barman of the Revolutionary Socialist Party (RSP), a constituent of the Left Front.

In Jangipur, former President Pranab Mukherjee's son Abhijit Mukherjee of the Congress faces a tough battle as he seeks a hat-trick of wins from the constituency, which had sent his father to the Parliament twice.

The Trinamool nominee is Khalilur Rahaman, while the BJP has given ticket to Mafuja Khatun, the party's only Muslim woman candidate in this election. Zulfiqar Ali of the CPI(M) is also contesting.

The tussle in Malda North is between cousins Isha Khan Choudhury of the Congress and incumbent MP Mausam Noor, who had won on a Congress ticket in 2014 but had deflected to Trinamool in January this year.

The BJP candidate from Malda North is another turncoat, Khagen Murmu, who crossed over from the CPI-M. The party has nominated Biswanath Ghosh.

In Malda South, Congress veteran and sitting MP Abu Hasem Khan Choudhury, the father of Isha Khan Choudhury, is up against Trinamool's Md Moazzem Hossain and Sreerupa Mitra Choudhury of the BJP. The CPI-M has not put up a candidate from here and is supporting Abu Hasem.

In 2014, the Congress had bagged Malda North, Malda South and Jangipur, while Balurghat went to the Trinamool and Murshidabad had a CPI-M winner.

According to an analysis by the West Bengal Election Watch and the Association for Democratic Reforms (ADR), 11 of the 61 candidates have assets worth over Rs 1 crore, while 15 (25 per cent) have declared criminal cases against their names.

The votes will be counted on May 23.