Nizamabad To Create History With 12 Voting Machine In Each Booth

Nizamabad, going to polls along with 16 other Lok Sabha seats on April 11, will become the first constituency in the country to see polling with Electronic Voting Machines (EVMs) for such a large number of candidates. 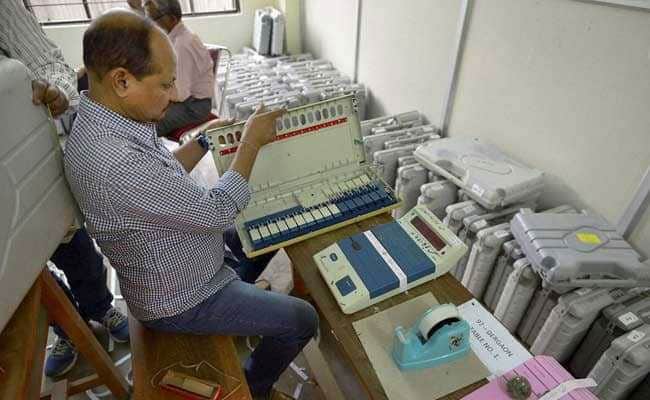 Nizamabad Lok Sabha constituency in Telangana is all set to create history in India's parliamentary elections with polling to be conducted with 12 big-sized EVMs in every polling booth as the voters have to choose from a whopping 185 candidates.

Nizamabad, going to polls along with 16 other Lok Sabha seats on April 11, will become the first constituency in the country to see polling with Electronic Voting Machines (EVMs) for such a large number of candidates.

With a record number of candidates, including 178 farmers who entered the fray to highlight the demand for remunerative prices for their produce, it was thought the Election Commission will go for ballot papers as an EVM can accommodate a maximum of 64 names.

The poll panel, however, decided against the use of ballot paper and ordered Electronics Corporation of India Limited (ECIL) to supply 26,820 EVMs, 2,240 control units and 2,600 Voter-Verified Paper Audit Trails (VVPAT) of M3 make.

Each polling station will have 12 M3 version EVMs, all connected to a single control unit and a VVPAT. These EVMS will be arranged in 'L' shape with each machine carrying a maximum of 16 names.

Officials said arrangements would be made for smooth conduct of polling in all 1,778 polling stations and they have set up a model polling station in the town to create awareness among voters about the polling system.

At every polling station, the officials will install flexi board with the serial numbers, names, photographs and symbols of the candidate to enable the voters to easily locate their choice.

Engineers of ECIL and Bharat Electronics Limited (BEL) were busy checking the EVMs and conducting mock-polling.

One flexi board with candidates' names and photographs was already displayed in front of the Collector's office.

Nizamabad District Collector, M. Ram Mohan Rao, who is the Returning Officer of the constituency, said the polling personnel were trained, keeping in view the special requirements.

However, EVMs alone are not likely to solve the problem in conducting the polls as the farmers, contesting as independents, complained that they were yet to be allotted the symbols.

They urged Chief Electoral Officer (CEO) Rajat Kumar to postpone the polling as it would take few days for them to popularize these symbols among voters.

The CEO said he would convey their demand to the EC, which would take final decision on the matter.

Some farmers have also approached the High Court seeking to postpone the polls to enable them to campaign and educate people about their respective symbols. Their petition is likely to come up for hearing on Monday.

The authorities are allotting a record 186 symbols including a symbol for None Of The Above (NOTA) option.

The contesting farmers argue that the polling process can't be completed smoothly as it would take 4-5 minutes for every voter to locate the symbol of the candidate of his choice and press the button.

The constituency, with over 15 lakh voters, attracted national attention with over 200 candidates filing nominations. Majority of them were turmeric and red sorghum farmers, who wanted to register their protest over the failure of the state and Central government to ensure them higher remunerative prices and address other issues.

After scrutiny and withdrawal of nominations, 185 candidates remained in fray.