Pilibhit has been the bastion of Varun Gandhi's mother Maneka Gandhi, who has been elected as an MP from there six times since 1989. This time, he is contesting.

Varun Gandhi's relations with the BJP have been strained for a while.

Western Uttar Pradesh's constituency Pilibhit is witnessing a strange conundrum. BJP's contender Varun Gandhi makes no mention of Prime Minister Narendra Modi or the BJP government's work in his campaign but the people of Pilibhit say they will vote for BJP only due to the PM. Voters complain about the Gandhis who have held the seat for the last 30 years but haven't done good work.

Pilibhit has been the bastion of Varun Gandhi's mother Maneka Gandhi, who has been elected as an MP from there six times since 1989. But this time her son is contesting.

Maneka Gandhi is the sitting MP of Pilibhit. In 2014 she won with a 52 per cent vote share. Varun Gandhi also fought from Pilibhit in 2009 and won by a margin of 3 lakh votes.

This time the mother-son duo has swapped seats. Maneka Gandhi is contesting from where her son Varun won in 2014, Sultanpur.

Varun Gandhi has been campaigning in villages all across Pilibhit round the clock. NDTV followed him on his campaign trail across 14 villages.

Varun Gandhi has a set pattern for his village rallies. He moves in a convoy of four cars. His workers ensure that before he reaches each village the tent and stage is already in place and enough people have gathered and are waiting for him. Once he reaches the location he makes a very short speech of about 5-10 minutes in which he starts by appreciating the village head and the villagers and then makes an emotional appeal to the voters. He covers 15 to 20 villages each day. He starts around 9 am and the village hopping goes until 6 pm. 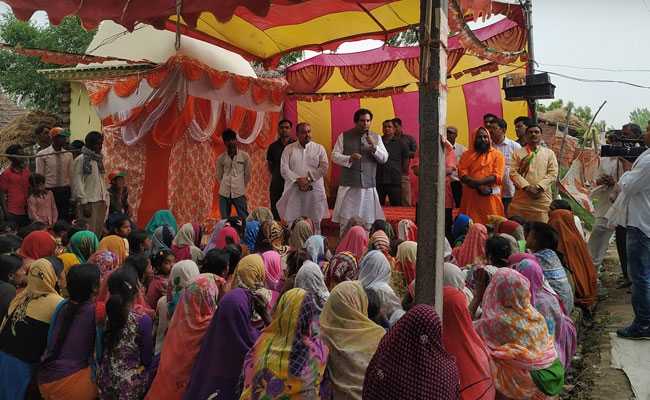 Varun Gandhi was dropped as BJP general secretary in 2014 and does not figure among party's star campaigners.

He made headlines for his hate comments against minorities in 2009 but in his campaign speeches now, he has a much softer and emotional tone.

Varun Gandhi makes it a point to remind the people about the family connection that Pilibhit has had with the Gandhis. At one of the village rallies, Varun Gandhi said, "30 years is a long time. A person grows up from the age of 10 to 40. When we came here initially the people who helped us in our fight, now their children are helping us in our victory. It is our good fortune that we got so much love. Today also I have come to protect you and your dignity. Trust me and I will not betray your trust. From your son's job to your father's medical needs I am always there. I won't let your head bow down with shame."

But strangely, while every BJP candidate across the country has been mentioning PM Modi and the work done by BJP government at the centre, Varun Gandhi's campaign had a different story to tell.

We heard him several times seeking votes in his mother's name or his own attachment to voters but surprisingly he never mentions PM Modi or the work done by BJP government at the centre.

Varun Gandhi's relations with the BJP have been strained for a while. He was dropped as the general secretary of the party in 2014 and does not figure among party's star campaigners. 2014 was the year when Amit Shah became the BJP President and it is said that Mr Shah was unhappy with the kind of controversial comments that Varun Gandhi would often make. Hence, the decision to drop him.

Currently, Varun Gandhi often takes potshots at Modi government's policies in his blogs. He mostly focuses on the loopholes in agrarian policies and the repercussions for the farmers.

Ironically, while PM Modi doesn't even get a mention from Varun Gandhi, those who want to vote for the BJP only want to do it because of the PM and not because of Varun and his mother.

Chatarpal, a Pilibhit resident, said, "I am supporting the BJP. The BJP has done good work in the last five years. Maneka Gandhi's work so far has been flop but I am seeing the work done at the centre."

Another resident Veerpal Singh said, "The people here in Pilibhit are not satisfied with Maneka Gandhi's work but we are all focusing on Modiji. He ran a very good government. Manmohan Singh could not do anything compared to what Modiji has done in the last 4.5 years."

Varun Gandhi also refuses direct media interactions. NDTV tried speaking to him but he refused saying he won't give interviews until the polling in Pilibhit is over.

To give competition to Varun Gandhi is Samajwadi Party's Hemraj Verma. He was the Food and Civil Supplies Minister under the Samajwadi Party's rule in Uttar Pradesh. Speaking to NDTV, he said, "Pilibhit's public has voted for the mother-son duo for 35 years. The mother even went to Cabinet level. But despite such stature they did nothing. If they had used even 20 per cent of it we would have progressed so much. Employment is a big issue then there is no direct train to even go to Delhi. No work has done in any sector."

Mr Verma believes that the fact that he is a local will help him fetch votes. He said, "The public of Pilibhit wants somebody who has come from here itself. They want somebody who stays here. The outsiders have not done anything. Such huge public support yet they did nothing. The public knows that the mother and son come here on a month's leave to fight elections. For 11 months they stay away."

The development issues echo with some in Pilibhit like 18-year-old Payal, a first time voter and B. Com student troubled by the lack of a University in Pilibhit and compelled to travel 51 kilometres away to Bareilly.

She studies at a college in Pilibhit which is affiliated to the MJP Rohilkhand University in Bareilly.

She said, "If there is any problem due to the scholarship teachers ask us to go to the University. Everybody doesn't have a bike. Taking a bus means at least 2-3 hours being spent. If we had the university here it would not be such a big problem. The quality of education in the colleges here is also not good. With the hope of change I will choose someone else in the elections but not BJP."

Vinod Awasthi, a Pilibhit resident said, "We support SP and Hemraj Verma. He is from my district and is my neighbour. He was a Minister also. In that duration he built so many roads all across Pilibhit. I will vote for him."

Pilibhit will go to polls in the third phase on April 23.

Over 44.45 Lakh People Affected Due To Cyclone Amphan In Odisha