CPM Announces Candidates For 2 Contentious Seats Amid Talks With Congress

The announcement by the CPI(M) might lead to a breakdown in its seat-sharing talk with Congress and eventually pave the way for a four-cornered contest in the state in the upcoming general election. 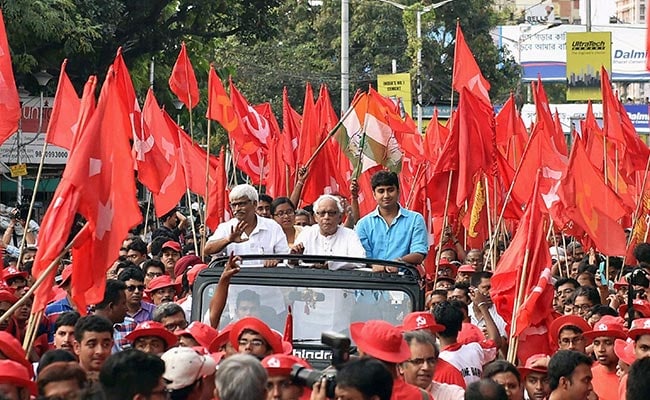 CPI(M) had proposed "no mutual contest" in the present six sitting seats for Lok Sabha polls.

Amid the ongoing seat-sharing talks between the CPI(M) and the Congress in West Bengal, the Left Front on Friday announced its candidates for the Raiganj and Murshidabad Lok Sabha seats, a bone of contention between the two parties.

The announcement drew sharp reactions from the Congress, which was not ready to compromise on those two seats, that "if needed, the party will fight alone in all the 42 Lok Sabha seats but will not compromise with its dignity".

The announcement of candidates in these two seats held by the CPI(M) might lead to a breakdown in the seat-sharing discussions between the two parties and eventually pave the way for a four-cornered contest in the state in the upcoming general election.

Besides the CPI(M) and the Congress, the ruling Trinamool Congress (TMC) and a resurgent Bharatiya Janata Party (BJP) are vying for a large number of seats in the politically important state in the upcoming polls.

The West Bengal Congress, in a press statement, said it was unfortunate that the Left Front had announced the two candidates while the discussion over seat adjustment was on.

"Mohammed Salim and Badaruddoza Khan had won these two seats the last time. We have decided not to field candidates in the four Lok Sabha seats won by the Congress the last time.

"We want to ensure the maximum polling of anti-BJP and anti-TMC votes and that is why we have decided not to contest the four Lok Sabha seats won by the Congress the last time," Mr Bose said.

Asked whether the Left Front would stick to its stand if the Congress did not respect its "no mutual contest" proposal, he said if they took a different stand, then the Left leaders would discuss the matter and take a call.

Reacting to the development, a senior state Congress leader, who was privy to the talks, told PTI, "If the CPI(M) thinks it can use these pressure tactics against us, it is wrong. If needed, we will fight alone. We have nothing to lose. We too want the maximum polling of anti-BJP and anti-TMC votes, but not at the cost of our dignity."

"We still have 10-11 per cent votes in Bengal, the Left should not forget that", he said.

The development came at a time when Congress president Rahul Gandhi had asked the Congress in-charge of West Bengal, Gaurav Gogoi, to speak to CPI(M) general secretary Sitaram Yechury in order to resolve the impasse over seat-sharing between the two parties in the state.

Mr Gandhi had also met West Bengal Congress chief Somen Mitra to discuss the matter. The state Congress had requested Gandhi to take a call on the matter.

The CPI(M) central committee on Monday came out with a proposal of "no mutual contest" in the Lok Sabha polls in the six seats jointly held by the two parties in the state.

It was seen as a move to untangle the seat-sharing formula between the two parties to consolidate the anti-BJP and anti-TMC votes.

While the Congress had bagged four seats in the state in the 2014 general election, the Left party had won only Raiganj and Murshidabad. Both seats are known as Congress bastions.

While North Dinajpur's Raiganj has been a pocket borough of Congress stalwart Priya Ranjan Dasmunsi, Murshidabad's politics has been dominated by the party's firebrand leader, Adhir Chowdhury, who is also a vociferous supporter of the alliance with the Left.

The two seats have been a bone of contention between the two sides since the beginning of the discussions.