The nomination comes amid a raging controversy over his decision to contest from a second seat - Wayanad in Kerala - in national elections that begin on Thursday. 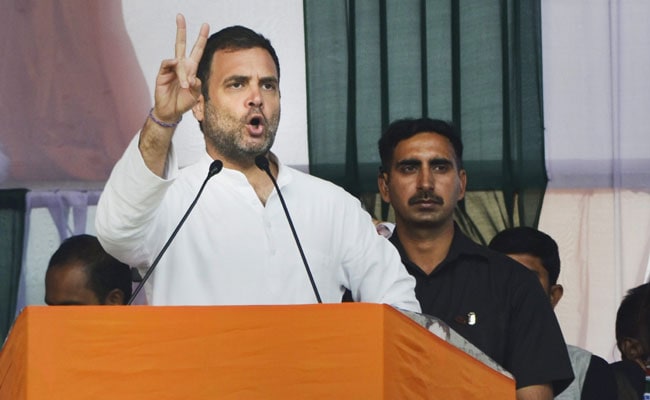 For the second consecutive time, Rahul Gandhi will face the BJP's Smriti Irani.

Congress president Rahul Gandhi will today file his nomination for the Amethi Lok Sabha seat, a Gandhi bastion in Uttar Pradesh he has represented for the last 14 years.

The nomination comes amid a raging controversy over his decision to contest from a second seat - Wayanad in Kerala - in national elections that begin on Thursday.

Rahul Gandhi will also hold a road show in Gauriganj town, the administrative headquarters of Amethi. The Congress chief is likely to be accompanied by his sister and the party's east UP in charge Priyanka Gandhi Vadra, and his mother and Rae Bareli Lok Sabha lawmaker Sonia Gandhi.

For the second consecutive time, Rahul Gandhi will face the BJP's Smriti Irani, who is likely to file her nomination papers a day later on Thursday.

In 2014, Smriti Irani lost to Rahul Gandhi but drew satisfaction from the much reduced margin of victory for Rahul Gandhi in a Gandhi family stronghold. In the past five years, she has repeatedly visited Amethi, a largely rural constituency around 130 km from Lucknow, and launched central government projects like the assault rifle manufacturing unit for which the foundation stone was laid last month by PM Modi.

Smriti Irani's narrative has been to highlight the Congress leader's "neglect" of the constituency. The Congress president's decision to contest from a second seat has bolstered the BJP's charge that Rahul Gandhi is "running away" because he is unsure of his prospects in Amethi. The Congress has rubbished the BJP's allegation, calling the Wayanad move a big southern outreach.

Last Thursday, Rahul Gandhi filed his nomination from Wayanad in Kerala and said he was contesting from a seat in south India as well to send a message of unity.

Amethi goes to polls in the fifth phase on May 6.