The photo posted on Instagram showed Priyanka as a toddler, playing with Indira Gandhi, joy evident on her face. 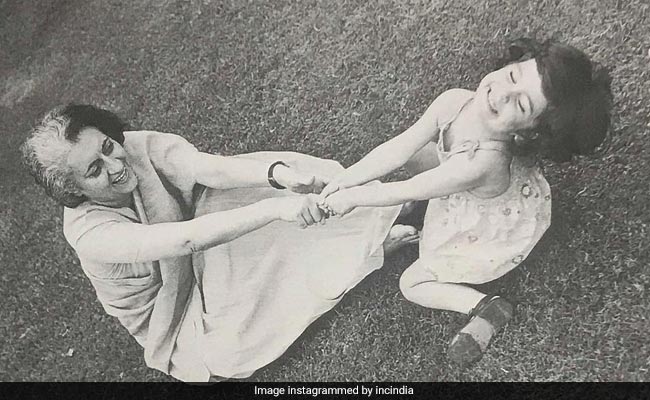 A day after Priyanka Gandhi Vadra's political debut, the Congress's #ThrowbackThursday post dug out a memory in black-and-white that illustrated her connection with grandmother Indira Gandhi, a former prime minister.

The photo posted on Instagram showed Priyanka as a toddler, playing with Indira Gandhi, joy evident on her face. The Congress also quoted Priyanka's father Rajiv Gandhi, also a former prime minister, as saying: "Priyanka is strong-willed, like my mother (Indira Gandhi)."

Priyanka Gandhi, 47, will be general secretary in charge of the eastern part of Uttar Pradesh, India's politically most important state with 80 seats - the highest of any state.

For years, Priyanka Gandhi stayed in the backroom of Congress politics, shining in a cameo rather than stepping into the spotlight like her brother, mother and all the others of the Nehru-Gandhi family before her.

But she always campaigned extensively in her mother Sonia Gandhi and brother Rahul Gandhi's constituencies Raebareli and Amethi in UP during elections.

On every outing, Priyanka Gandhi was compared to Indira Gandhi; political analysts said she was a natural and more suited to the political life than her brother Rahul, older by two years and seen for a long time as a reluctant politician.

Her charm and easy connect with the masses, combined with a strong personality and sharp political reflexes, felt to the Congress like a throwback to the 1970-80s, when Indira Gandhi reigned supreme.