Four sepoys and a Havildar Sunil Kumar from Patna district had laid down their lives in Galwanvalley. 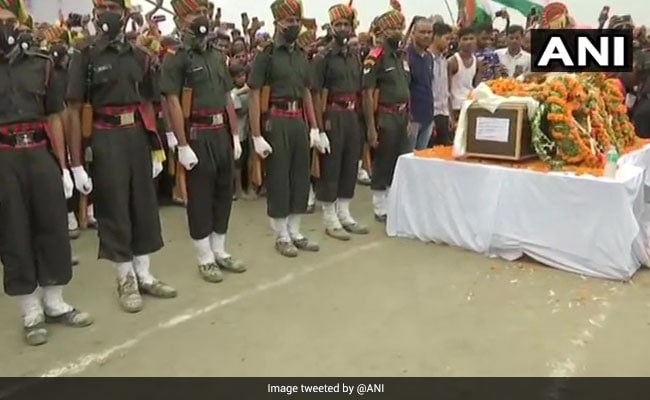 Sepoy Jai Kishor Singh had joined the Army in 2018.

Gun salutes mingled with cries of revenge as bodies of four Army soldiers from Bihar, among the 20 who were killed in the border clashes with Chinese troops, were consigned to flames at their respective native places on Friday.

Four sepoys and a Havildar Sunil Kumar from Patna district had laid down their lives in Galwan valley. The Havildars body was cremated on Thursday, having arrived on the previous day.

Chants of "Kundan Yadav amar rahein" (long live Kundan Yadav (caste surname) rent the air in the north Bihar district of Saharsa when the jawan, who had joined the Army eight years ago and is survived by wife and two years, was cremated in presence of a huge crowd, including state minister Ramesh Rishidev.

"The Bihar government is with the bereaved family members in this hour of sorrow. The martyr has done the country proud. His sacrifice will not go in vain", Rishidev said on the occasion.

Similar scenes were witnessed at Vaishali district where last rites of Jai Kishor Singh, a young sepoy who joined the Army in 2018 inspired by his elder brother and whom his family was planning to get married this year, were performed on the banks of the Ganges amid anti-China slogans reverberating through the landscape.

Ministers Nand Kishore Yadav and Vijay Kumar Sinha were present on the occasion as representatives of the state government which has announced an assistance of Rs 36 lakh besides a government job to each bereaved family.

In Samastipur, Aman Kumar Singh was cremated in presence of a huge crowd led by minister Maheshwar Hazari, who also consoled the bereaved family and assured them of all support.

His bereaved father said, amid sobs, that he was ready for more sacrifices and would be glad if more members of his family joined the Army and avenged the martyrdom of his son.

In Bhojpur, which takes pride in being the birth place of 1857 hero Veer Kunwar Singh, Chandan Kumar was cremated in presence of ministers Prem Kumar and Vinod Kumar Singh.

A huge swarm had gathered at the cremation ground which vibrated with echoes of slogans seeking a "befitting reply" to China's "treachery".