Many candidates appearing for JEE exams in Kolkata claim they had to wait for long hours in the rain for transport. The state government though had asked all state transport buses to commence services from 5 am in view of the exam. 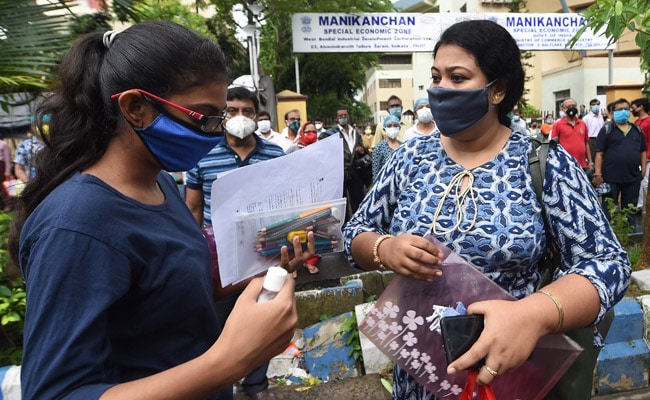 JEE (Main) candidates at an exam centre in Kolkata

Candidates appearing for JEE (Main) examination in West Bengal had a difficult time reaching their test centres Tuesday morning due to heavy rain and lack of transport. The government had asked all state transport utilities to commence bus services from 5 am in view of the exam, but several candidates in North 24 Parganas, Berhampur, Malda and Siliguri claimed that they had to wait for hours in the rain, to get a bus to reach their exam centres.

Suspension of local train services due to the COVID-19 pandemic added to the trouble of the candidates. "I had to hire a cab to reach the centre at TCS Gitobitan in Salt Lake from Khardah (North 24 Parganas) as no direct bus was available. It would have been easier if the trains were running," Subham Das, one of the candidates, said.

Adequate safety measures have been taken for the students, a spokesperson at TCS Gitobitan said. "Candidates were allowed inside after thermal screening. Not more than 12 candidates sat in a room. The entire campus has been sanitised for the purpose," he said.

However, state education minister Partha Chatterjee had on Monday said that he would no longer comment on the matter as the Centre has entrusted the NTA (National Testing Agency) to take necessary measures for the safety of the students.

All 10 Bodies Recovered From Tunnel Collapse Site In Jammu