The incident happened last evening at the venue of the Indian Overseas Congress UK Mega Conference for the Indian diaspora in Ruislip in West London. 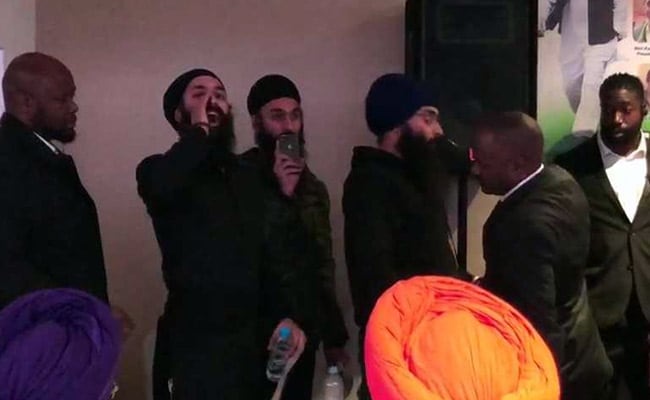 Three pro-Khalistan supporters entered an event here where Congress president Rahul Gandhi was to address his last public meeting in the UK and tried to disrupt it but were escorted out by Scotland Yard before his arrival.

The incident happened last evening at the venue of the Indian Overseas Congress UK Mega Conference for the Indian diaspora in Ruislip in West London.

A group of three Khalistani activists managed to enter the event and started shouting 'Khalistan Zindabad' when Scotland Yard officers tried to escort them out of the venue before the Opposition leader had arrived for his final engagement at the end of a two-day visit to the UK.

The hundreds gathered for the conference began a counter-chant of 'Congress party Zindabad' in reaction to the attempted disruption.

In his opening address, chairman of the Overseas Congress Department of the All India Congress Committee (AICC), Sam Pitroda said: "Our message is all about democracy, freedom, inclusion, diversity, jobs, growth, prosperity, bottom-up development. We want you (diaspora) to spread that message. The results of 2019 (elections) will define India of the future".

Calling on the Indian diaspora to take Mahatma Gandhi's message of non-violence global, he said: "We all know that lies spread like wildfire on social media. Large number of media we believe does not do justice to us. We need your (diaspora) help in taking the right message to the media as well because one little mistake gets blown out of proportion".

Mr Gandhi, in his address in Hindi, reiterated many of the messages from his previous interactions in London, describing the Congress party as a force to fight against hatred and divisions and called on the diaspora to get behind it in the run up to the 2019 general election as "foot soldiers" of the party.

"Our party was set up by NRIs. Mahatma Gandhi, Jawaharlal Nehru, Sardar Patel were all NRIs. They all went out into the world and brought their new way of thinking to help their country. You are following those footsteps," he said.

Taking aim at Prime Minister Narendra Modi, the Congress president attacked his "arrogance" for claiming that no development took place in India before he assumed power.

"When he says that, he is not insulting the Congress party but the citizens of India. But the media is with him," he said.