In July, Congress president Rahul Gandhi had hugged and winked at Prime Minister Narendra Modi during a raging debate on No-Confidence Motion. 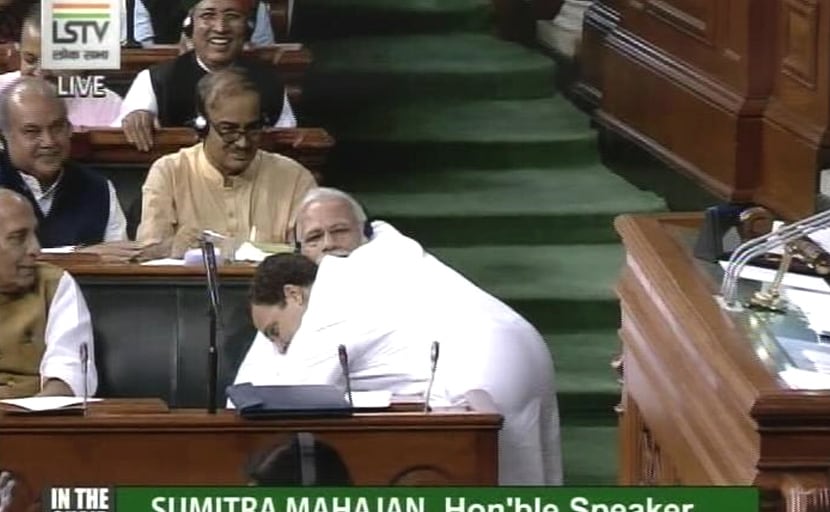 Rahul Gandhi had astonished the parliament by hugging the PM. (File)

"The Chief Minister had called him a name and the definition says that a person who does silly things is called a buffoon. Whole nation watched when he broke all parliamentary practices and hugged the Prime Minister; everybody felt it was a silly move," Kavitha told reporters here.

In July, Congress president Rahul Gandhi had hugged and winked at Prime Minister Narendra Modi during a raging debate on No-Confidence Motion between the ruling National Democratic Alliance and the Opposition.

"The whole nation watched when the leader of the opposition, breaking all the established practices of the Parliament, suddenly crossed over and hugged the Prime Minister. Everybody felt it was a very silly move and that is why our leader responded," Kavitha added.

She further stressed that both Congress and the BJP have always fallen short on their promises, adding that regional parties will soon play a major role in national politics.

"The federal front is being floated. Our agenda is to address to the people of this nation, not to the political parties. Currently, there is a group called NDA that miserably failed in various promises they made, starting from Women Reservation Bill to various other issues. We believe that a neutral platform should be established, which is free of both the BJP and the Congress," the TRS MP said.

While saying that the TRS has addressed the issues of the people in Telangana, Kavitha said that the party wanted to replicate their efforts at the national level and wanted to join forces with other parties to rid the nation of the Congress and the BJP.

"We are working for a coalition which is free of both the Congress and the BJP and we are not a B-team of anyone but a B-team of the Indian people and the Indians," Kavitha said.