Karnataka Election Result: Of the 222 assembly seats for which polling took place, the BJP has bagged 104. 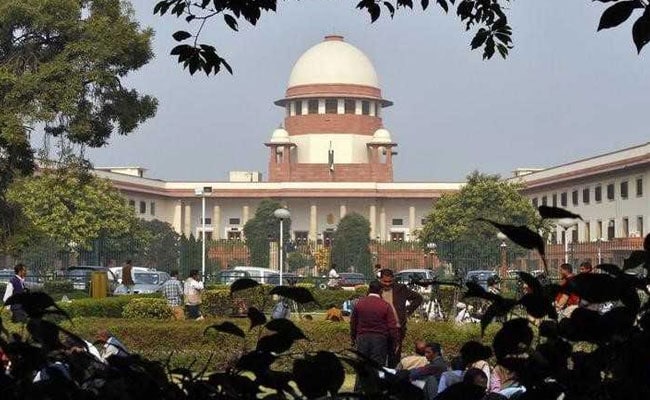 New Delhi/ Bengaluru: In a big setback for the Congress, the Supreme Court has refused to stay the swearing-in ceremony of BJP leader BS Yeddyurappa, in an unprecedented overnight hearing. Mr Yeddyurappa had been invited by Karnataka governor Vajubhai Vala, last evening, to form government in Karnataka and was given 15 days to prove majority on the floor of the house. The Congress wanted the governor's decision to be cancelled, calling it an "encounter of the Constitution". The BJP contends that it should be allowed to form the government as it is the single largest party. The Congress disputes the claim, citing the precedent set by the BJP in Goa and Manipur last year. In both states, the Congress emerged as the single-largest party but the BJP cobbled up alliances and was invited to form the government.

Here are the live updates on race for government formation in Karnataka:

In a few hours from now, Sri @BSYBJP will be sworn in as Chief Minister as per your wishes.

While we will start a golden chapter in the history of Karnataka, the people of India, like the SC, will reject Congress's mercy petition.#DemoracyWins

Supreme Court Registrar arrives at the residence of Chief Justice of India Dipak Misra, with the petition filed by Congress and JD(S) over swearing-in of BS Yeddyurappa as #Karnataka Chief Minister tomorrow pic.twitter.com/QRIVkLknB2

May 17, 2018 00:27 (IST)
Supreme Court registrar reaches Chief Justice Dipak Misra's residence in Delhi.
May 17, 2018 00:25 (IST)
Supreme Court registrar is currently scrutinising the petition filed by Congress. If the Registrar agrees to the urgency of the petition then he will take the it to Chief Justice Dipak Misra's residence.
May 16, 2018 23:37 (IST)
NDTV's Monideepa Banerjie reports that 30 members of Anglo Indian community will stage "dharna" outside Raj Bhavan in Bengaluru from at 9.30 am tomorrow. In letter to the Karnataka governor "the Anglo Indian community urged him to protect their constitutional rights by not allowing any political party or group to use this nomination to seek political advantage for its own gain or benefit."
May 16, 2018 23:20 (IST)
Heavy security outside the residence of BS Yeddyurappa in Bengaluru.
May 16, 2018 23:13 (IST)
RJD leader Tejashwi Yadav tweets on Karnataka:"If single largest party is being invited inspite of INC & JDS alliance having more numbers than required then we demand Hon. President to dismiss Bihar govt thru Governor & invite single largest party of Bihar to form govt as BJP is in Bihar govt due to post poll alliance."
May 16, 2018 23:04 (IST)
High security at the residence of Chief Justice Dipak Misra in New Delhi.
May 16, 2018 22:56 (IST)

Read: Congress Goes To Chief Justice After Karnataka Governor Invites BJP To Form Government
The Congress has approached Chief Justice Dipak Misra for an urgent hearing after the Karnataka Governor invited BJP's BS Yeddyurappa to form government and gave him 15 days to prove majority on the floor of the house.
May 16, 2018 22:29 (IST)
After Karnataka governor invited BJP to form government in the state, JDS leader HD Kumarasway says, "By giving 15 days time (to prove majority) governor is encouraging horse-trading by BJP leaders, this is unconstitutional. We will discuss the future plan." 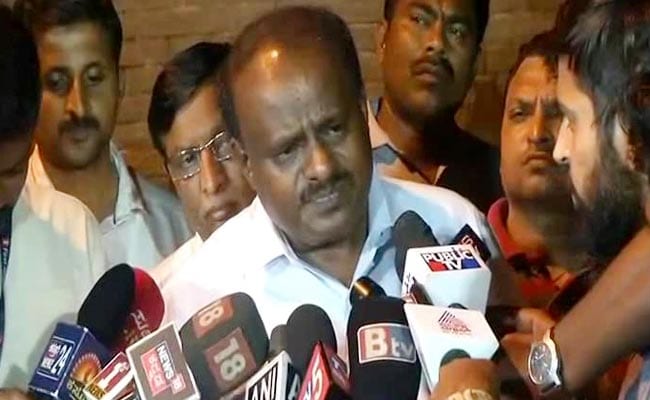 May 16, 2018 22:26 (IST)
Congress leader and lawyer Abhishek Singhvi representing Congress in the top court. The Congress had earlier decided to approach the Supreme Court if BJP was invited to form government.
May 16, 2018 22:23 (IST)
Congress moves Supreme Court as governor invites BJP to form government in Karnataka. Party approaches Chief justice for urgent hearing.
May 16, 2018 22:16 (IST)
Former Union Minister Yashwant Sinha tweets on Karnataka political turmoil: "I am glad I have left the party which is so brazenly trying to subvert democracy in Karnataka. It will do the same if it fails to get majority in Lok Sabha next year. Pl note my warning."
May 16, 2018 22:13 (IST)
Mr Surjewala says, "Amit Shah and BJP today sanctioned an encounter of the constitution and the law. Governor has subjugated the law and shamed the office of governor and I don't think such a person has the right to continue."
May 16, 2018 22:11 (IST)
Congress spokesperson Randeep Surjewala addresses media, says, "The letter shows that even the governor doesn't believe they have the majority." He adds, "If two parties can't come together in a post poll alliance, then how did you form a government in Manipur?" 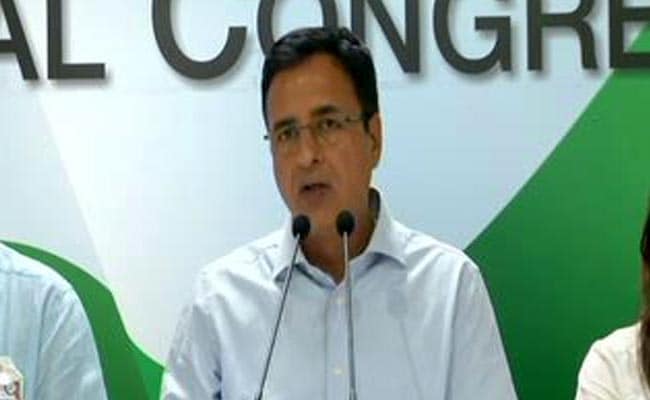 May 16, 2018 21:56 (IST)
Addressing media in Delhi, Union Minister Ravi Shankar Prasad says, "Let Congress not advise us." He adds that Congress keep talking about Supreme Court judgement but Supreme Court has said that the platform of Vidhan Sabha is the only forum where majority can be tested. 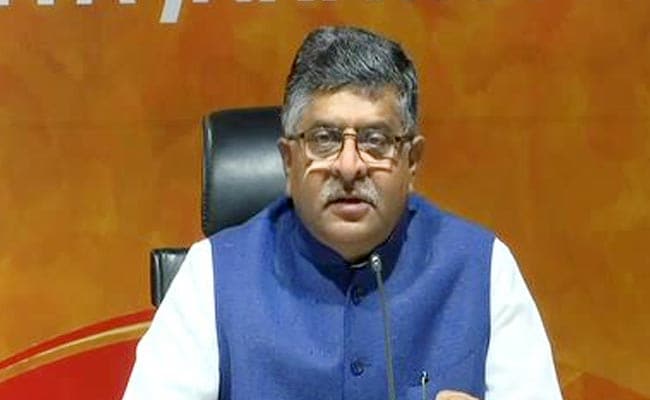 Governor invites Mr Yeddyurappa to manufacture a majority in 15 days.

Governor gives Mr Yeddyurappa 15 days to convert the number 104 into 111. 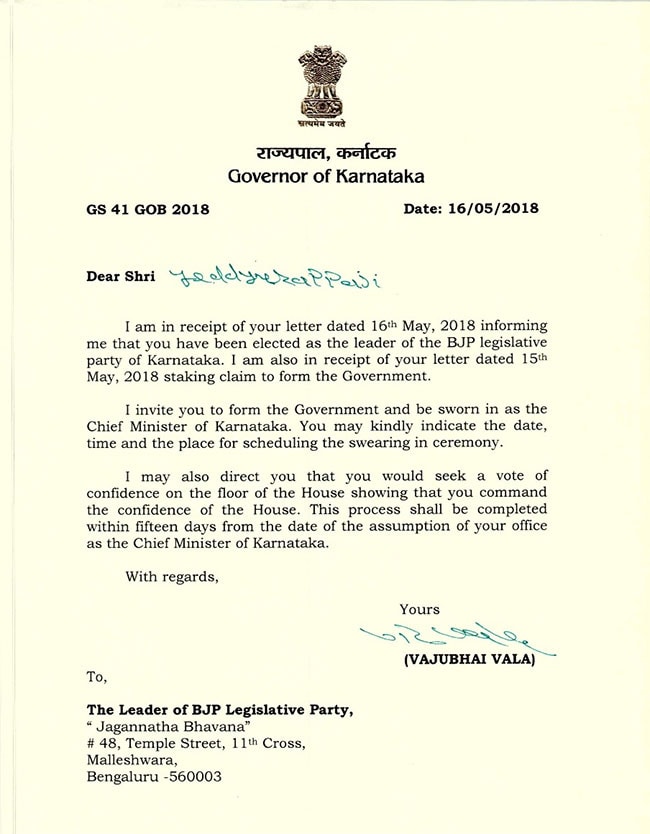 The moment that crores of Kannadigas are awaiting is here.

Sri @BSYBJP will take oath as Chief Minister of Karnataka tomorrow morning at 9.00 AM at Raj Bhavan.

The movement to build our Suvarna Karnataka has started. #CMBSY

Opinion: Why Congress Defeat In Karnataka Is A Respectable One
Yet the BJP, as well, has a bit of introspection to do. It has come to rely far too much on the Prime Minister's charisma, and its own belief that it will shape the narrative to its advantage.
May 16, 2018 21:09 (IST)
Heavy rain in Bengaluru.
May 16, 2018 21:05 (IST)
Now, BJP spokesperson Sureshkumar deletes his tweet on governor inviting BS Yeddyurappa for swearing-in.
May 16, 2018 21:02 (IST)
After an intense election, new Congress lawmakers in Karnataka are in for a paid holiday at a five-star resort. The party, worried about losing its lawmakers in the fierce race for numbers, has moved them to the Eagleton Golf Resort near Bengaluru. They arrived a few while back.
Read: Back To Bengaluru Resort For The Congress. This Time, For Karnataka MLAs Mizoram Allocates Funds For Relief to Myanmar People Who Crossed Over