Kareena Kapoor Khan said: "I truly believe that with her beauty and her talent, Sara Ali Khan is going to rock the industry for sure" 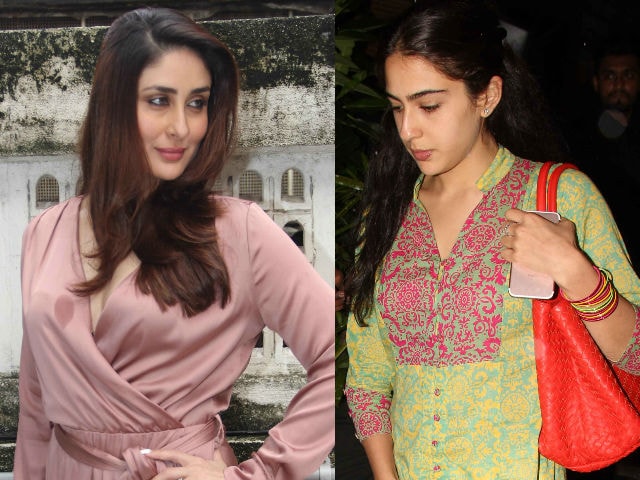 New Delhi: Actress Kareena Kapoor Khan says that Sara Ali Khan, who is her husband Saif Ali Khan's daughter from his first marriage to actress Amrita Singh, will 'rock the industry,' reports news agency PTI. Sara Ali Khan is debuting opposite Sushant Singh Rajput in Abhishek Kapoor's Kedarnath. Kareena told PTI: "I am sure she is going to be supremely talented. She has it in her genes, she is looking gorgeous. I truly believe that with her beauty and her talent, she is going to rock the industry for sure." Sara's director Abhishek Kapoor recently gave her a similar compliment. He told NDTV: "Sara is a beautiful bundle of energy."

Saif Ali Khan was married to Amrita Singh from 1991 to 2004. They are parents to Sara, 23, and Ibrahim 19. Saif married Kareena Kapoor in 2012 and their son Taimur Ali Khan Pataudi was born in December 2016. Earlier, Kareena, who is one of Sara's mentors, wanted her debut to be handled by Karan Johar, who has introduced the like of Alia Bhatt and Varun Dhawan in Bollywood. However, Amrita Singh had the final say while shortlisting scripts for her daughter.

Meanwhile, talking about the concept of Sara's debut film, Abhishek Kapoor told NDTV: "Kedarnath is a love story set on a pilgrimage. I believe Kedarnath is a story that the world will want to watch.''

Abhishek Kapoor also directed Sara's co-star Sushant Singh Rajput in his debut film - Kai Po Che. Kedarnath is expected to release next year and as of now, Sara is in New York with her father and brother to attend the ongoing IIFA awards.