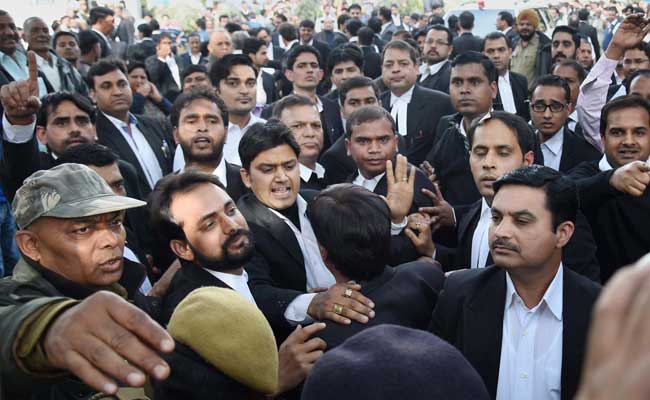 Lawyers clashed with JNU students outside Patiala House Court in Delhi before students' union president Kanhaiya Kumar was due to arrive in court . (Press Trust of India photo)

New Delhi: When Kanhaiya  Kumar, the JNU student arrested for sedition, is brought to a Delhi court today, only five reporters will be allowed into the court-room; supporters of Mr Kumar have to pick two representatives to attend the hearing, said the Supreme Court today.

The rules were issued as judges took up the case of Monday's shocking and so far unpunished attacks on journalists and JNU students and faculty by a group of lawyers and a BJP legislator, OP Sharma.

Despite the violence being caught on camera, the Delhi Police has not arrested anyone yet, and its two cases are registered against "unknown persons" though some of the attackers, including Mr Sharma, cannot just be clearly seen in photos and videos, but have admitted to participating in the beatings.

The assaults began before Mr Kumar was due to arrive in court to find out if he would get bail. Reporters and JNU students were ordered to leave. Some were beaten with sandals and kicked. Others were warned not to film the violence.

Mr Kumar, 28, was arrested last week from the prestigious Jawaharlal Nehru University or JNU after an event on campus that saw anti-India slogans being raised. Mr Kumar has said he was not among the people who made those remarks. The government has said it has evidence that he did, but has yet to share details. Five other students from JNU have also been accused of sedition; the police raided cities in Maharashtra and Uttar Pradesh today to locate them.

Despite a seething confrontation with students and the opposition, the government has said it will not permit anti-national activities.

In Kolkata yesterday, students at the left-wing Jadavpur University rallied in support of Mr Kumar and JNU; at their demonstration, too, cheers were heard for Afzal Guru, the Kashmiri hanged three years ago for masterminding the attack on Parliament in 2001. The Home Ministry has today asked the Bengal government for a report on the protest.