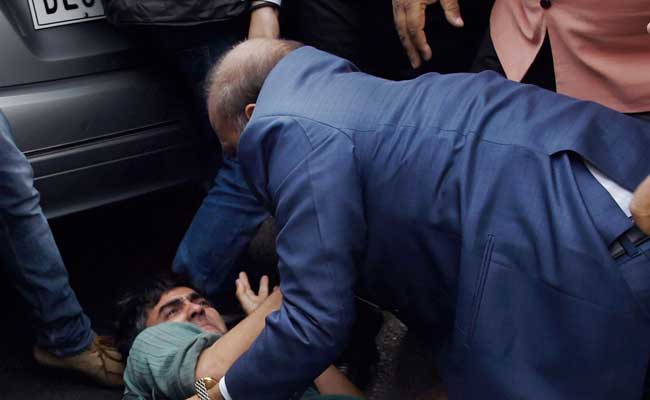 BJP legislator OP Sharma and his supporters attack a man outside a Delhi court. (Press Trust of India photo)

New Delhi: Amid those caught on camera beating up students, journalists and teachers at a Delhi court was OP Sharma, a state legislator from the BJP.

The politician said today that outside court, he heard a man shouting pro-Pakistan cheers. He said he was hit first and then retaliated. "I got hurt on the head...if someone hits me or strikes my head, then shouldn't I hit back?" he said today, alleging that his retribution was "a natural act".

Mr Sharma can be seen in photos and video footage thrashing a Left activist in violence that erupted before Kanhaiya Kumar, a student leader at the Jawaharlal Nehru University or JNU, was brought to court. Mr Kumar was arrested last week on charges of sedition, which has united the opposition and students and faculty at the prestigious university against the government, which is being accused of crushing dissent. BJP legislator OP Sharma said that he was targeted first outside the court and hit back in retaliation.

For days, thousands of students have been protesting at JNU against the arrest of Mr Kumar, 28, and the police search on campus that preceded it.

The government and the police say that evidence gathered shows Mr Kumar and other students shouting slogans against India and defending terrorist Afzal Guru, who was hanged three years ago.

Opposition leaders and some legal experts have pointed out that sedition charges cannot apply unless an attempt was made to incite violence.