'You Will Be Harmed,' NDTV Reporter Covering JNU Case Was Warned

When the NDTV journalist identified herself, the men warned, "We don't require you here, leave or you will be harmed."

New Delhi: Caught on camera, lawyers, wearing the black jackets they use in court, assaulted a range of reporters who had gathered to cover the arrest of a JNU student which has tenanted national headlines for the last few days.

The lawyers were seen kicking and beating people. An IBN reporter said he was slapped and his shirt was torn. News organizations including The Economic Times and ABP said their journalists had been assaulted.

NDTV's Sonal Mehrotra said she was inside the court-room, seated near senior professors from JNU (Jawaharlal Nehru University) when a group of lawyers confronted them aggressively and asked them to leave "right now".

When the NDTV journalist identified herself, the men warned, "We don't require you here, leave or you will be harmed." Five policemen who witnessed the interaction did not intervene. 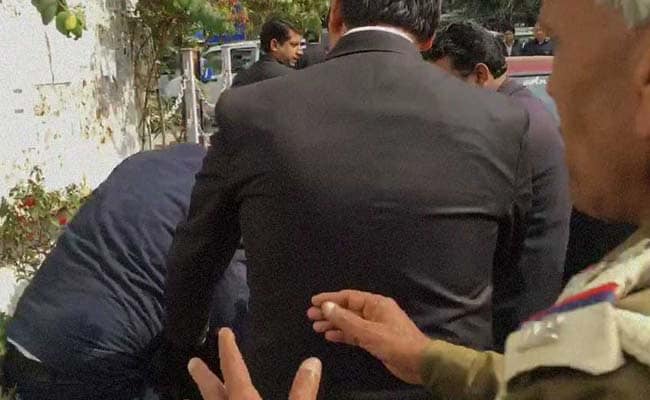 The lawyers were seen kicking and beating people.

Ms Mehrotra said she then exited the court-room to film the violence that had erupted outside. She said 10-15 lawyers were asking people, "Are you from JNU?" and then began attacking reporters.

Her cellphone was snatched from her till she wrested it back. "Delete the video or we will break your phone and break your bones," she was ordered. The footage she captured is airing on NDTV 24X7.

Last week, Kanhaiya Kumar, the president of the JNU Student's Union was arrested on charges of sedition. He has said he is wrongly being accused of chanting anti-India slogans that were shouted at an on-campus event called to protest against the hanging of terrorist Afzal Guru. Opposition parties have united in accusing the union government of an illicit over-reaction in ordering police to search the campus and in arresting Mr Kumar despite no real evidence.

Home Minister Rajnath Singh has said that while no innocent person shall be harassed, the "guilty will not be spared" for anti-national activities.