This was interpreted as a dig at Washington Post, which has been critical of the BJP-led government's decisions like the scrapping of special status to Jammu and Kashmir, the restrictions in Kashmir and the citizenship law. 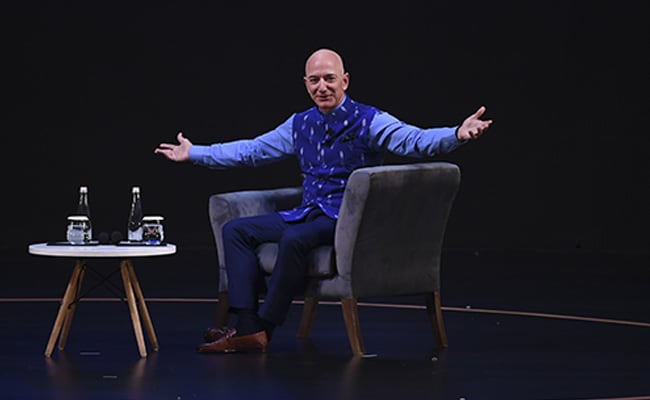 Jeff Bezos has left India after a three-day visit that did not feature any meeting with ministers or top government functionaries. There was talk about the Amazon CEO meeting with Prime Minister Narendra Modi, but requests for an appointment had been turned down a month ago, government sources told NDTV.

The perceived snub to the world's richest man with an estimated net worth of $115 billion has been linked to articles critical of the government in the Jeff Bezos- owned Washington Post.

News agency ANI quoted a senior official as saying the meetings did not take place as Amazon, the world's largest e-commerce player, is engulfed in controversies.

The anti-trust body Competition Commission of India is investigating the business model of Amazon and Walmart-owned Flipkart over allegations of predatory pricing, deep discounting, exclusivity and preferential seller treatment.

Amazon is facing a similar investigation in the United States and Europe.

The government's cold treatment was apparent after Jeff Bezos announced plans to invest one billion dollars (about Rs 7,092 crore) in India and enabling 10 billion dollars in cumulative exports in the next five years by digitally enabling micro, small, and medium enterprises (MSMEs) and traders. Union Commerce and Industry Minister Piyush Goyal responded by saying Amazon was doing no favours.

The billionaire's praise for India on social media since his arrival on Tuesday didn't help. To Mr Bezos's post: "Dynamism. Energy. Democracy. #IndianCentury", the BJP's foreign policy in-charge sneered: "Please tell this to your employees in Washington DC. Otherwise your charm offensive is likely to be waste of time and money."

Mr @JeffBezos , please tell this to your employees in Washington DC. Otherwise your charm offensive is likely to be waste of time and money . https://t.co/L06kI0AqLn

This was seen to be a dig at Washington Post, which has been critical of the BJP-led government's decisions, from the scrapping of special status to Jammu and Kashmir and the restrictions in Kashmir to the citizenship law. On December 13, 2019, the US daily published an article under the headline "India's new law may leave millions of Muslims without citizenship". Sources say this and other articles against the Citizenship (Amendment) Ac have deeply upset the government. Washington Post has also been targeted by several BJP leaders and supporters on Twitter.

"I am not opposing Amazon as a company, in fact I am a regular customer ... Jeff Bezos should go home tell Washington Post what is his impression about India," Vijay Chauthaiwale told Reuters.