Speaking to reporters at the sailing off, India's High Commissioner to Singapore Jawed Ashraf said the Eastern Team fleet is continuing India's commitment and objective to see the oceans remain "peaceful, open space and uncontested". 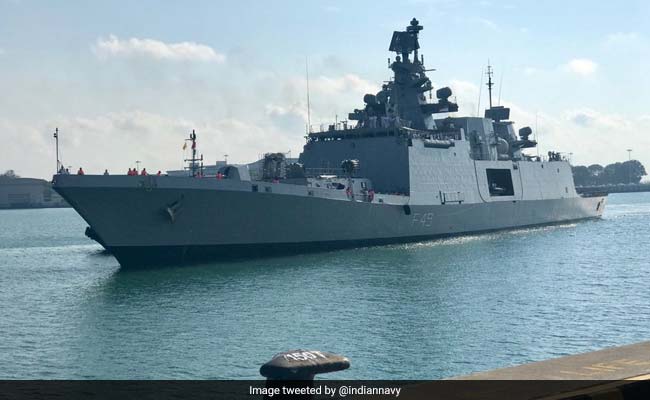 Singapore: Three Indian naval ships sailed out of Singapore today to join upcoming MALABAR exercise which will be held jointly with the US and Japanese navies off Guam in the Pacific Ocean.

Speaking to reporters at the sailing off, India's High Commissioner to Singapore Jawed Ashraf said the Eastern Team fleet is continuing India's commitment and objective to see the oceans remain "peaceful, open space and uncontested".

"These ships are on their way to MALABAR exercise with the navies of United States and Japan, and one of them, INS Sahyadri, will take part in the 'RIMPAC' exercise," he said.

RIMPAC or the Rim of Pacific Exercise is the biggest maritime warfare exercise involving navies of several countries. It is held by the US Navy biennially in the ocean around Hawaii.

The US-Japan-India joint naval exercise comes amidst flexing of muscles by China in the regional waters.

During the deployment while on MALABAR exercise, the ships will be building partnerships and closer bonds with the navies of Thailand, Malaysia, Indonesia and Vietnam.

"In a way, our engagement with the region is growing with regular exercises," he said, stressing on the excellent relations with major maritime power.

INS Sahyadri and INS Kamorta as well as tanker INS Shakti, with 730 navy personnel, were in Singapore for three days, interacting with the local Navy.

"With Singapore, we have the longest and uninterrupted exercise which has been going on for 25 years," he said.

The envoy also highlighted the success of Indian Ocean Naval Symposium, a platform where navies can communicate with each other and develop a sense of understanding, which has now grown to 34 member countries including Singapore.

MILAN, he said, was another naval exercise promoting multi-lateral exercises and understanding in managing oceans.

He stressed India's good relations with many of the littoral states, saying "we will continue to build on that".

"We are conscious of the need to work with others (navies) to prevent any contesting in the Ocean," said the envoy, adding that the Indian Ocean remains most peaceful and the most uncontested region.

The US had last week warned China that it would face "consequences" for military buildup in the disputed South China Sea in the Pacific Ocean where Beijing has deployed anti-ship cruise missiles and surface-to-air missile systems.

China is engaged in hotly contested territorial disputes in both the South China Sea and the East China Sea. China claims almost all of South China Sea. Vietnam, Philippines, Malaysia, Brunei and Taiwan have counter claims.

In April, the Chinese military held its largest ever maritime drill in the disputed South China Sea during which it displayed for the first time the country's aircraft carrier strike group and the most advance weaponry of the People's Liberation Army (PLA).

The drill was held amid frequent forays made by US naval and aircraft into the South China Sea to assert the freedom of navigation especially around the artificial islands built by China, where it has also established garrisons.

Meanwhile, the Indian High Commission said the visit of naval ships seeks to underscore India's peaceful presence and solidarity with friendly countries towards ensuring good order in the maritime domain.

"Indian Naval assets have been increasingly deployed in recent times to address the main maritime concerns of the region. The current deployment will contribute towards the Indian Navy's efforts to consolidate inter-operability and forge strong bonds of friendship across the seas," it said in a statement.

India and Singapore share a rich history and a strategic relationship, it said, adding that a number of bilateral agreements exist between the two countries in various spheres.

Promoted
Listen to the latest songs, only on JioSaavn.com
An Indian naval delegation also interacted with Republic of Singapore Navy (RSN) representatives during their visits on board under construction RSN's new Littoral Mission Vessel (LMV) RSS Justice and at International Fusion Centre.

The three Eastern Fleet Ships had arrived in Singapore on 6 May.
Comments
INS SahyadriINS KamortaINS Shakti