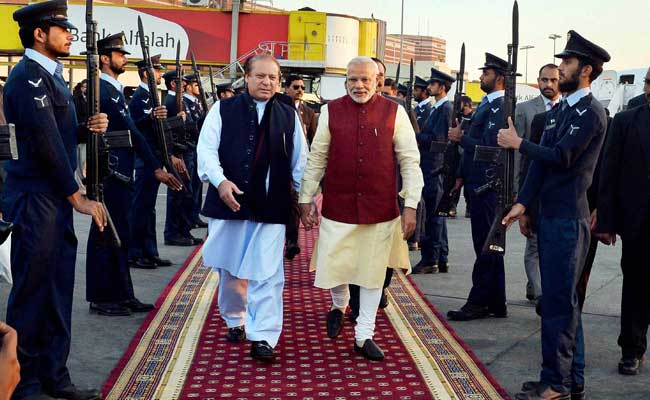 Pakistan has clarified that PM Modi and his personal staff members were given a 72-hour visa, and full immigration process was followed.

Islamabad: Foreign secretaries of India and Pakistan will meet here on January 14-15 to prepare a schedule of meeting for the comprehensive dialogue, Pakistan's Advisor on Foreign Affairs Sartaj Aziz said even as he cautioned against "unrealistic expectations" from the talks.

Mr Aziz made a policy statement in the Senate yesterday regarding the short visit of Prime Minister Narendra Modi to Pakistan on December 25.

"The foreign secretaries would meet on January 14-15 and draw up a map for the next six months for talks on 10 identified subjects," he said, adding that the dialogue process is challenging as it involves difficult decisions and important issues.

Mr Aziz also cautioned against "unrealistic expectations" from the dialogue process and said there would be progress on some issues soon while it will take time for progress on others.

He said the visit of PM Modi was a goodwill visit and it has been welcomed by majority of people in Pakistan and India and the international community.

He said now the two leaders have met at least five times and the warmth of relations created by the Lahore meeting would hopefully have an impact on the formal dialogue.

Mr Aziz dispelled the impression that the entourage of the Indian Prime Minister visited Lahore without any visa. He said PM Modi and 11 of his personal staff members were given a 72-hour visa, and the full immigration process was followed in this regard.

Rest of the dignitaries who were part of the entourage stayed inside the airport and no foreigner was allowed to move out without a valid visa.

Responding to a point raised by leader of the opposition Aitzaz Ahsan, Mr Aziz said no secret meeting was held between the prime ministers of India and Pakistan at Kathmandu last year.

Replying to points raised by other members, Mr Aziz said "India changed its hostile attitude towards Pakistan because of our constructive diplomacy, international pressure and domestic lobbies in India".