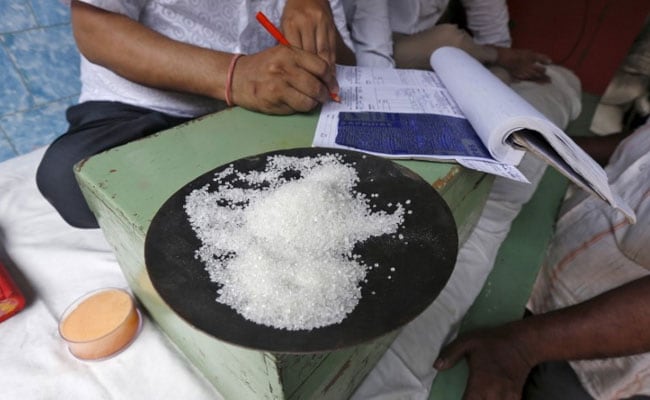 India has so far contracted to export 275,000 tonnes sugar (Reuters)

Sugar stocks in India are likely to more than double by the end of the current marketing year as the world's biggest producer of the sweetener struggles to export a surplus, a leading trade body said on Tuesday.

The rise will weigh on local prices, potentially pushing the country to try to ship more sugar overseas, which could drag on global prices that have already fallen 16 per cent this year.

The country is likely to end the marketing season on September 30 with inventory of 10 million tonnes, compared with 3.87 million tonnes a year ago, the Indian Sugar Mills Association (ISMA) said.

"Production is at a record high. Inventory is rising, but mills are not exporting sugar due to lower returns," said one Mumbai-based dealer with a global trading firm.

India has so far contracted to export 275,000 tonnes sugar from its record production of 32.25 million tonnes, dealers said.

The glut is likely to swell in the 2018-19 season starting October 1, with Indian production expected to jump by almost a tenth from the current year to between 35 million tonnes and 35.5 million tonnes, the ISMA said.

Uttar Pradesh, the biggest producer, could churn out 13-13.5 million tonnes of sugar in the next year, the association said.

That would be up 12 per cent from the current year, with the ISMA saying farmers have devoted a bigger area to high-yielding varieties of sugar cane.

Maharashtra's sugar output is estimated at 11-11.5 million tonnes in the new season, up from 10.71 million tonnes, the ISMA said.

(This story has not been edited by NDTV staff and is auto-generated from a syndicated feed.)
Comments
SugarUttar Pradesh