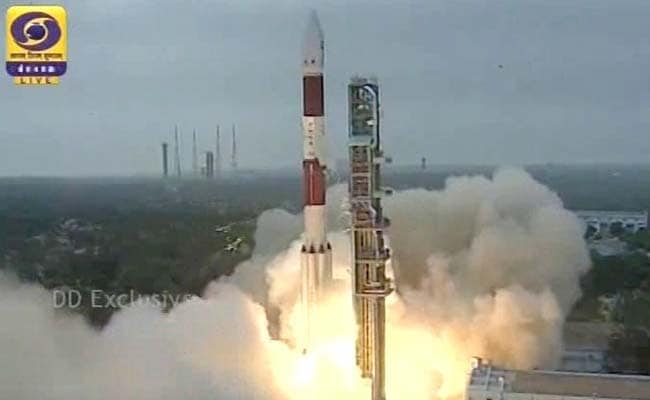 Resourcesat-2A is intended to continue the remote sensing data services to global users.

"Today we had a successful launch of RESOURCESAT-2A to provide three tier imaging data. The satellites solar panels were deployed. The launch was perfect," A S Kiran Kumar, Chairman, Indian Space Research Organisation (ISRO), said soon after the launch.

Mr Kumar said that for the first time a camera was put on the rocket, and as a result the launch of the satellite and the deployment of solar panels were seen.

Around 10.25 a.m. the PSLV-XL variant rocket standing 44.4 metres tall and weighing 321 ton tore into the morning skies with fierce orange flames at its tail.

Gathering speed every second, the rocket raced towards the heavens amidst the cheers of the ISRO officials and the media team assembled at the port in Sriharikota.

At the rocket mission control room, Indian space scientists at ISRO were glued to their computer screens watching the rocket escaping the Earth's gravitational pull.

Around 18 minutes into the flight, the rocket slung the 1,235 kg Resourcesat-2A into an 817 km polar sun synchronous orbit.

The PSLV rocket is a four stage/engine rocket powered by solid and liquid fuel alternatively.

The new satellite Resourcesat-2A is intended to continue the remote sensing data services to global users provided by it two predecessors.

The RESOURCESAT-2A carries three payloads which are similar to those of the earlier two Resourcesat's.

They are a high resolution Linear Imaging Self Scanner (LISS-4) camera operating in three spectral bands in the Visible and Near Infrared Region (VNIR) with 5.8 m spatial resolution and steerable up to 26 degree across track to achieve a five day revisit capability.

The second payload is the medium resolution LISS-3 camera operating in three-spectral bands in VNIR and one in Short Wave Infrared (SWIR) band with 23.5 m spatial resolution.

The third payload is a coarse resolution Advanced Wide Field Sensor (AWiFS) camera operating in three spectral bands in VNIR and one band in SWIR with 56 m spatial resolution.

Promoted
Listen to the latest songs, only on JioSaavn.com
The satellite also carries two Solid State Recorders with a capacity of 200 Giga Bits each to store the images taken by its cameras which can be read out later to ground stations.

Maharashtra Governor Gets Court Notice Over Government Bungalow In Uttarakhand