The Indian Railways video, which also features Prime Minister Narendra Modi, talks about the engineering excellence that went into the construction of the underwater metro tunnels. 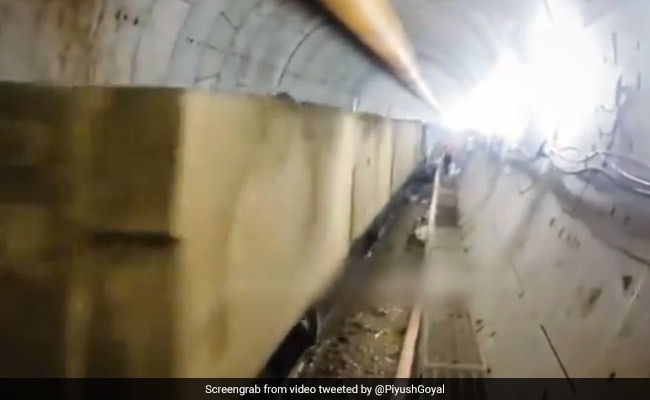 The underwater train will be part of the Kolkata Metro Line 2, also known as the East-West Metro

The first underwater train in India will be operational under Kolkata's Hooghly River, Union Railway Minister Piyush Goyal announced on Thursday. He also posted an Indian Railways video on the upcoming metro line that will feature this underwater train.

The underwater train is an "example of excellent engineering. This train is a symbol of the progress of the railway in the country. With this, Kolkata residents will feel comfortable, and the country will feel proud," Mr Goyal tweeted in Hindi.

The video, which also features Prime Minister Narendra Modi, talks about the engineering excellence that went into the construction of the metro tunnels. The video, released by the Indian Railways, also mentions the "four protective covers" to prevent water leakage in the two tunnels.

The train will be part of the Kolkata Metro Line 2, also known as the East-West Metro. The 16km-line will be made operational in two phases. The first phase, connecting Salt Lake Sector 5 station to Salt Lake Stadium station, will span across 5 km and is scheduled to start running later this month. The new metro line is expected to cut travel time for commuters significantly.

The underwater sector on this line will connect Salt Lake Sector 5 station to Howrah Maidan station. Once completed, the under-the-river Metro ride will be all of 60 seconds long.

Construction of the metro tunnels under the river began at the Howrah end in April 2017. The tunnels are 520 metres long and about 30 metres deep. Two top-order tunnel boring machines, nicknamed Rachna and Prerna, were brought from Germany in parts and assembled underground for the construction of the tunnels.

As of now, Kolkata has just one metro line, known as North-South Metro.