Software services exports are experiencing their longest slump in seven years, which could blow the current account deficit to the widest since 2013 and pressure the rupee. 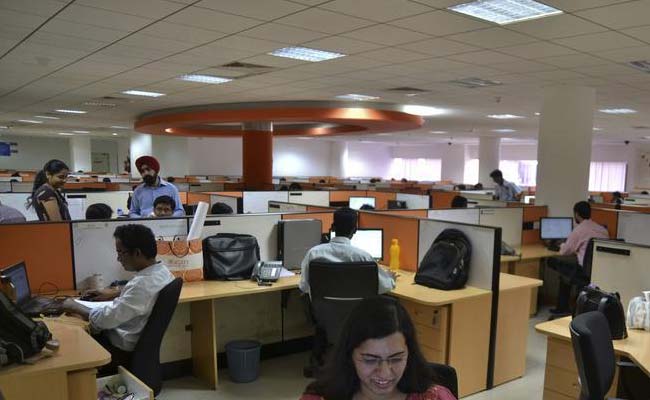 Indian policy makers are also bracing for a hit where it hurts the most: jobs.

The resignation of Vishal Sikka as chief executive officer of India's bellwether technology company masks the rot in India's once feted export sector.

While Sikka cited heightened acrimony with a cohort of founders at Infosys Ltd., the malaise is much deeper, and threatens to become a faultline for Asia's No. 3 economy. Software services exports are experiencing their longest slump in seven years, which could blow the current account deficit to the widest since 2013 and pressure the rupee. Policy makers are also bracing for a hit where it hurts the most: jobs.

"Indian service companies gained scale over the last decade as the disrupters, creating the modern offshoring industry, but they are now the incumbents, challenged by a slew of specialized and niche start-ups bred in this new environment," Arvind Subramanian, Prime Minister Narendra Modi's top economic adviser, said in his economic survey published this month. Growing anti-globalization tendencies "in the U.S. during and after elections and the Brexit referendum" also threaten Indian jobs, he said.

Employment was Modi's key pledge when he swept to power in 2014 and will probably emerge as a top issue in 2019 elections. India's tech industry is the country's largest private sector employer, and Indian engineers had become ubiquitous to the point of parody in TV shows and books over the past decade. They are also crucial dollar-earners, with services exports helping offset a goods-trade deficit. But part of their appeal was that they came cheap, making them the target of public anger as wages plunged in developed economies.

India's economic survey cited President Donald Trump's 'Buy American, Hire American' executive order and the U.K.'s increase in visa costs as factors limiting the free movement of Indian engineers. Moreover, automation threatens 69 percent of jobs in India, according to a 2016 World Bank report. Executive search firm Head Hunters India estimates that 175,000 to 200,000 technology jobs will be lost in the country each year through 2020, and newspapers are rife with reports of mass layoffs in the sector.

"Hiring momentum remains slow," NASSCOM, which represents India's $154 billion information technology and business-process management industry, said in its review for the April-June quarter. However incremental revenue was the strongest in four years and global activity is recovering, it said.

The recovery won't be strong enough to meet India's needs. Teresa John, a Mumbai-based economist at brokerage Nirmal Bang, predicts the current account deficit will balloon to 1.9 percent of gross domestic product in the year through March 2018, potentially weakening the rupee.

"The invisibles surplus, which has traditionally offset India's trade deficit, is facing structural headwinds on account of the decline in software exports as well as remittances from oil-dependent Gulf countries," she said.

Infosys is India's second-largest software exporter. Started in 1981 by seven engineers, it's now a company with a net profit of $2 billion and revenue of over $10 billion this year and almost 200,000 employees -- mainly based in Bengaluru, India's Silicon Valley. The company has been trying to haul itself out of a growth slowdown through job cuts and investment into news areas such as data analytics.