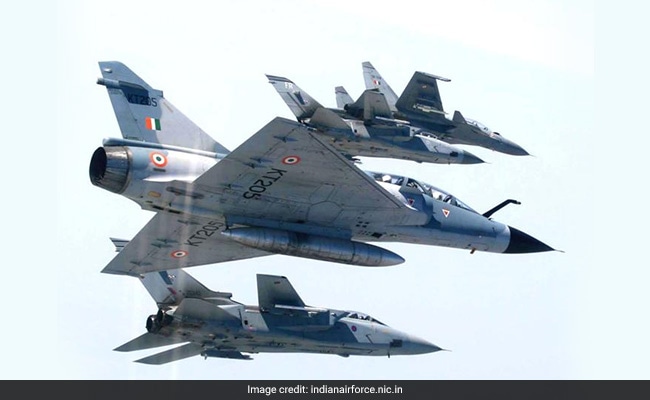 "A large number of terrorists were eliminated... It was a non-military, pre-emptive strike," said Foreign Secretary Vijay Gokhale.

The IAF strikes come two week after the terror attack in Pulwama in which over 40 soldiers of the Central Reserve Police Force (CRPF) were killed by a suicide bomber of the Jaish-e-Mohammed.

The Jaish-e-Mohammed had claimed responsibility for the February 14 attack and had also posted videos of the bomber, who had joined the terror group a year ago. India had earlier in September 2016 carried out surgical strikes on terror launch pads across the Line of Control in retaliation to an attack on an army base in Kashmir's Uri that month.

District Magistrate Rajouri,J&K:Due to prevailing situation on Line of Control,all govt&private schools located in 0-5km range from LoC in Rajouri district shall remain closed today.Exams of classes 5,6&7 scheduled for today also stand cancelled in all the schools of the district

Surgical Strikes Hero Lt Gen DS Hooda On What Pak Could Do Next
Lt Gen DS Hooda (Retired) says he does not see Pakistan responding to the Indian Air Force strikes in Balakot with its full might. "I don't see it escalating to a full-blown war... I don't see any easy choices for Imran Khan that he is now going to escalate and this thing is going to spiral out of control," he said.
Feb 26, 2019 22:09 (IST)
Last week, France said it will move a proposal at the United Nations in a "couple of days" to designate Masood Azhar as a global terrorist. This will be the second time France - a permanent member of the UN Security Council - will be party to such a proposal at the UN.
Feb 26, 2019 21:14 (IST)
"Recognise India's legitimacy to ensure its security against cross-border terrorism": France
The statement by the acting spokesperson of the Ministry of Europe and Foreign Affairs says-
Feb 26, 2019 20:06 (IST)

IAF Strikes: Politicians Across Parties Praise India's Air Strikes On Jaish Camp
IAF strikes: The political leaders across parties reacted positively to the Air Force's retaliation after the Pulwama attack.
Feb 26, 2019 19:38 (IST)
RSS congratulates Govt, IAF for translating people's feeling into action
The RSS congratulated the government and the Indian Air Force for the pre-dawn air strikes on terror camps in Pakistan, saying they translated the the feelings and anger of millions of Indians.
Feb 26, 2019 18:53 (IST)
Sushma Swaraj after the all party meeting, says that she is glad all leaders congratulated us for the surgical strikes and forgot all the political differences. Everybody all gave assurance to fight against terror. 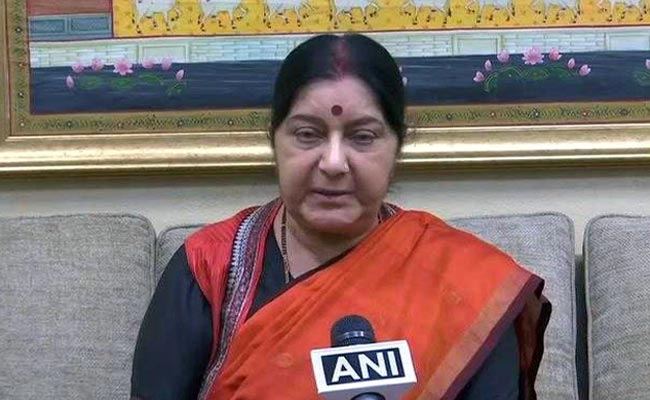 Feb 26, 2019 18:35 (IST)
Congress leader Ghulam Nabi Azad on Tuesday after the all party meeting said, "We will continue to support our security forces to end terrorism from the country. The best thing about the operation was no civilian was killed." 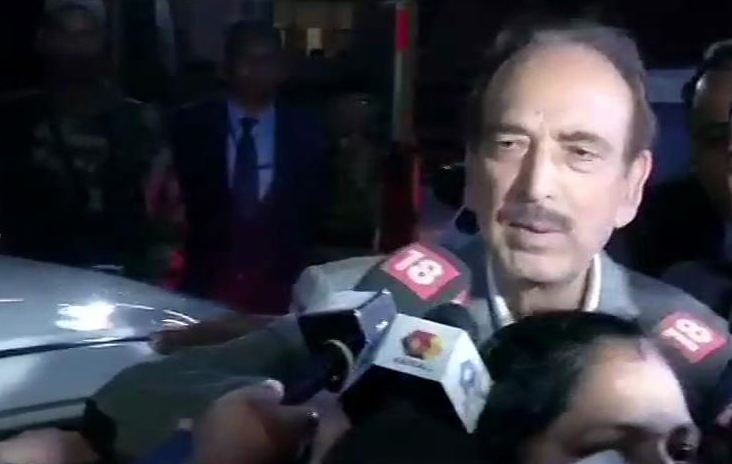 Feb 26, 2019 17:53 (IST)
Fight Not With Pak, Fight With Terror Establishment: Sushma Swaraj
External Affairs Minister Sushma Swaraj at the all party meeting says:
Feb 26, 2019 17:25 (IST)
EU urges 'maximum restraint' from India, Pak after air strike: AFP
The EU on Tuesday called on New Delhi and Islamabad to exercise "maximum restraint" after  twelve Indian Air Force Mirage 2000-5 IN fighter jets crossed the Line of Control around 3.30 am and dropped 1,000 kg laser-guided bombs on the targets.
Feb 26, 2019 17:18 (IST)
India carried out pre-dawn, pre-emptive air strikes across the Line of Control to target Pakistan-based Jaish-e-Mohammed, which was planning more attacks in the country after Pulwama, the government said today. Here's what we know: 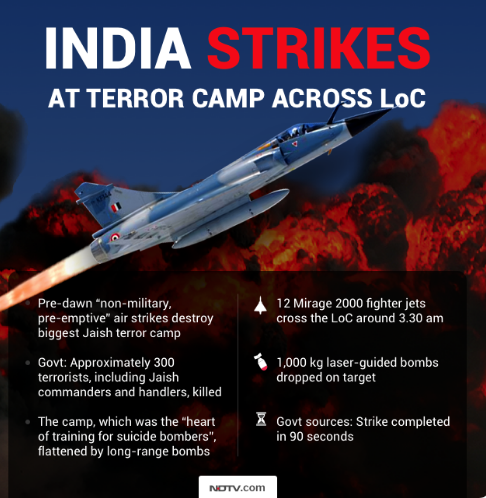 Feb 26, 2019 17:12 (IST)
Pictures of Jaish-e-Mohammed terror camp in Balakot show a firing range, pool and a gym besides dormitories and training areas, official sources say.
Indian fighter jets destroyed the camp, flying across the Line of Control this morning. 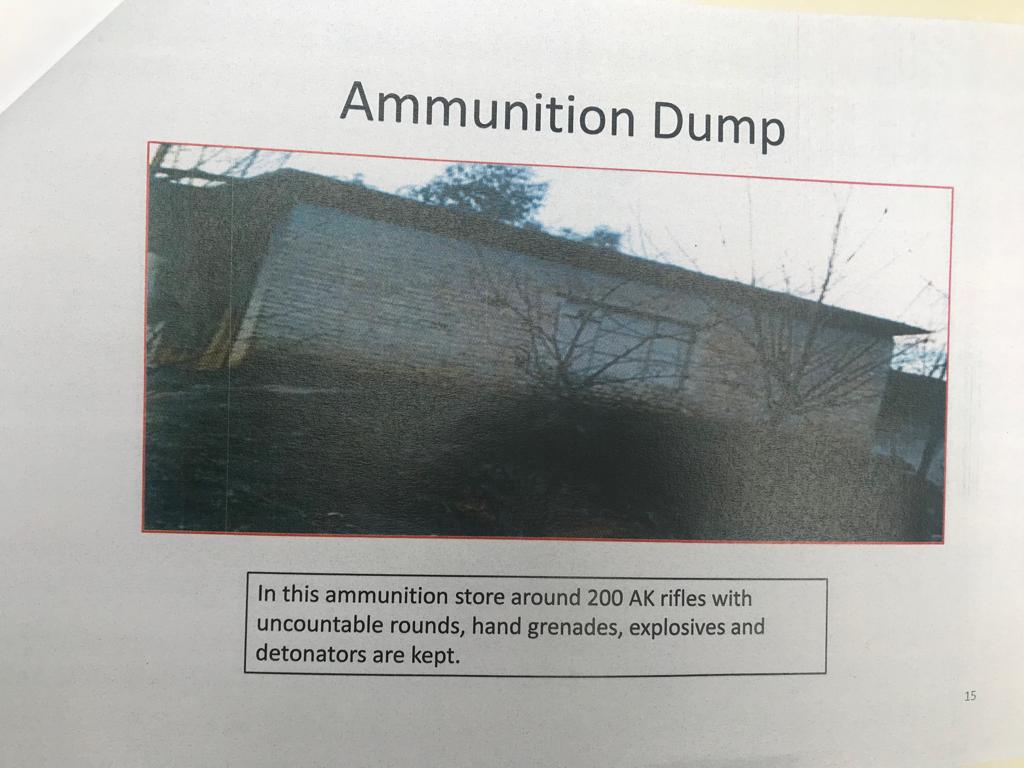 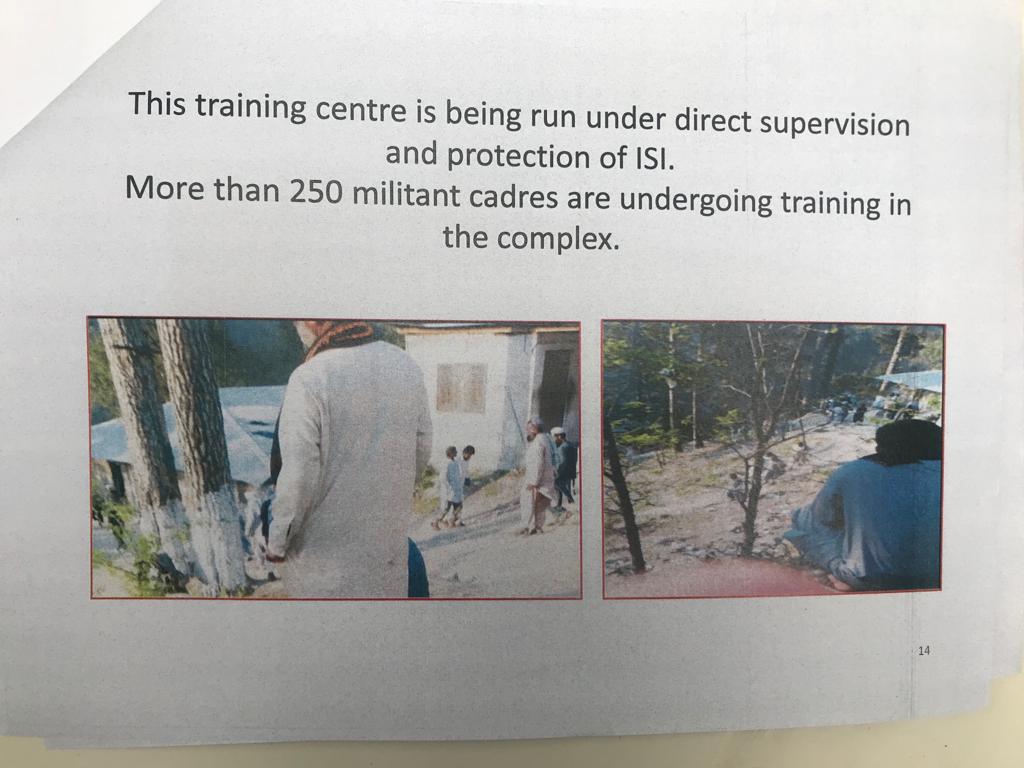 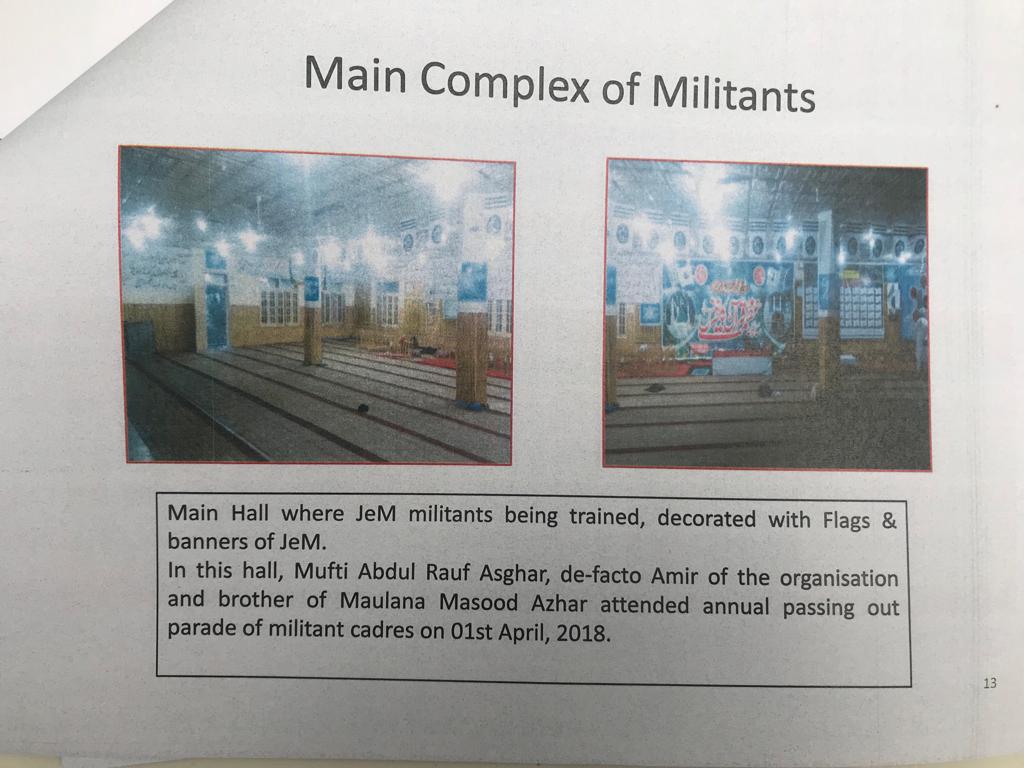 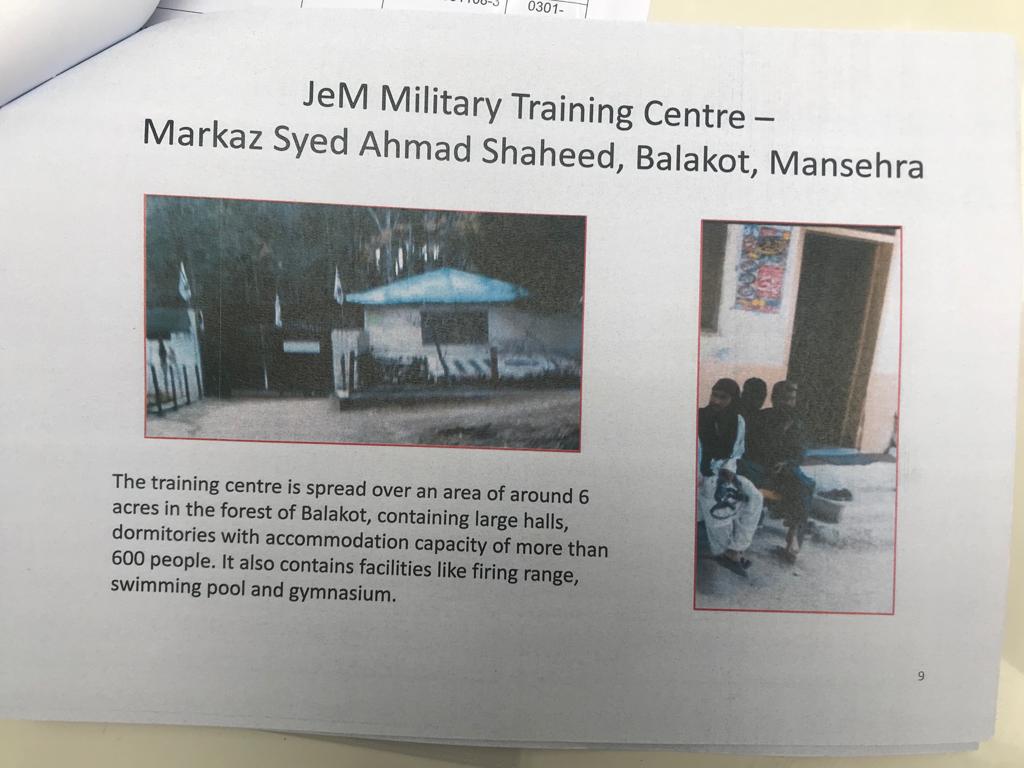 Feb 26, 2019 16:51 (IST)
Visuals of celebrations after India carried out the strikes in Balakot across the Line of Control (LoC) two weeks after the terror attack in Jammu and Kashmir's Pulwama. 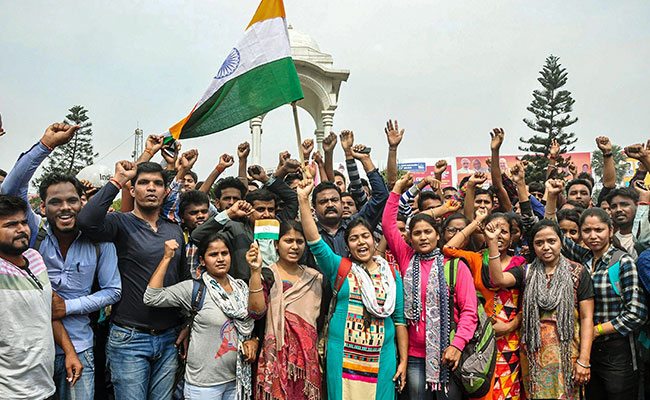 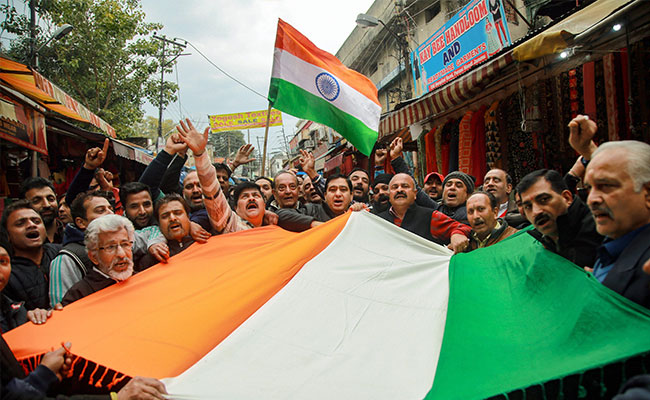 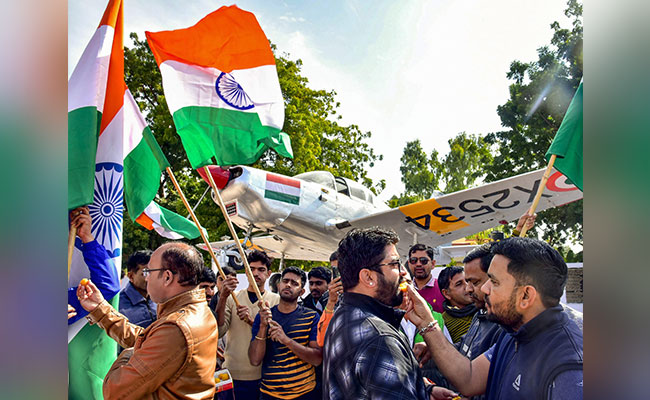 Feb 26, 2019 16:47 (IST)
Visuals Of High alert at Wagah Border
Strict vigil at Wagah Border on a day when Indian Air Force jets targeted biggest Jaish terror camp across the Line of Control. High alert on at Ambala air base. 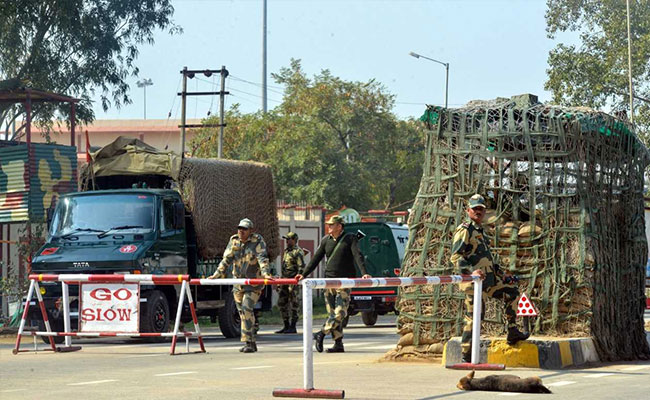 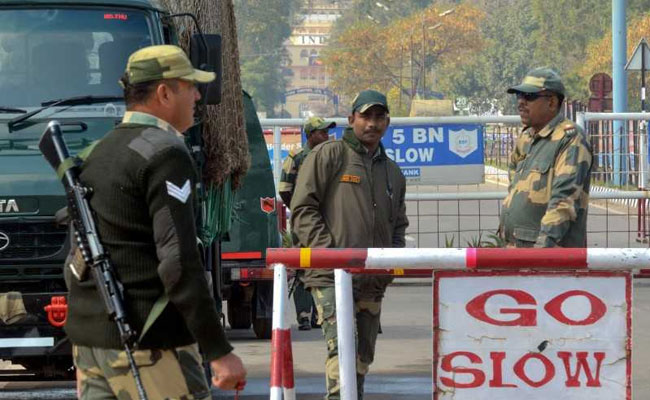 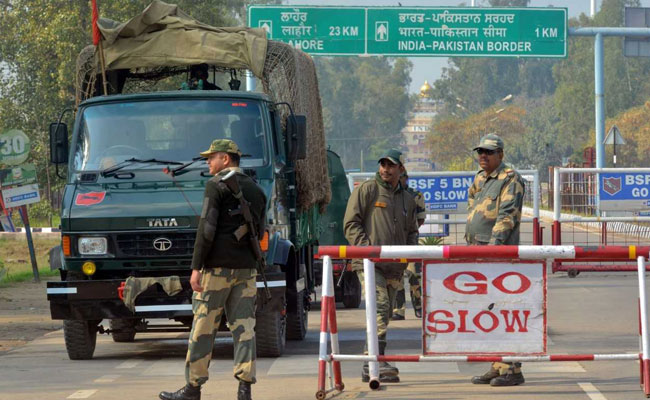 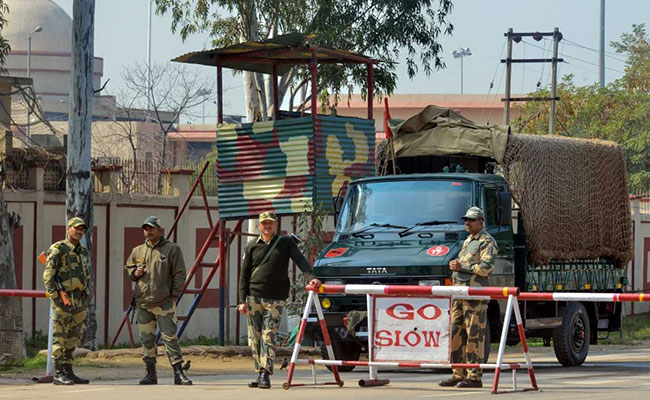 Feb 26, 2019 16:42 (IST)
Australia Says Pak Must Take Urgent, Meaningful Action Against Terrorist Groups
The Australian press release states:
Feb 26, 2019 16:32 (IST)
Only PM Modi Could Deliver This, Says Yogi Adityanath On Air Force Strikes
Uttar Pradesh Chief Minister Yogi Adityanath praised the Indian Air Force's (IAF) action against Jaish-e-Mohammed terrorist camp across the Line of Control. He added it was only under Prime Minister Narendra Modi's leadership that this could be possible.
Feb 26, 2019 16:22 (IST)
"Attack Due To Credible Information Received": Hans Castellanos, Dean of Diplomatic Corps
Dean of Diplomatic Corps, Hans Castellanos says, "Satisfied that Indian government has had such a rapid response in informing Heads of Missions. The information is that they did not affect any civilian or any Pakistan military installation, that it was direct attack due to credible intelligence received." 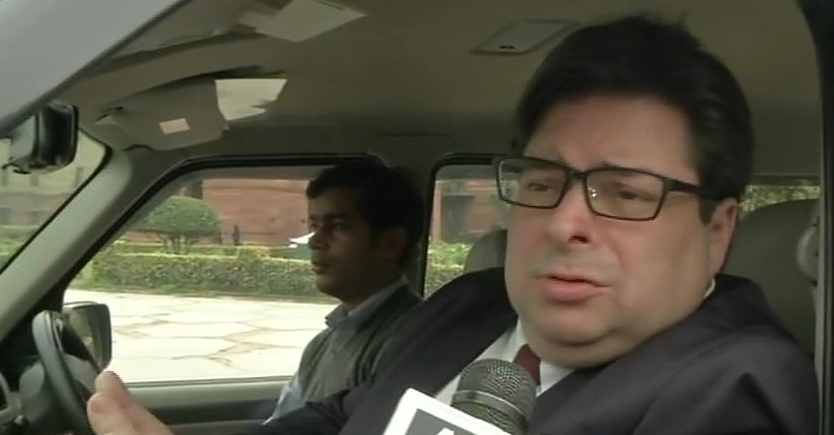 Feb 26, 2019 16:14 (IST)
''Message has been sent to them'': Defence Experts Praise IAF's Strike
Various defence experts hailed the IAF's pre-dawn air strike on a Jaish-e-Mohammed's terror camp in Pakistan with some saying "the message had been communicated strongly".
Feb 26, 2019 15:52 (IST)
PM Modi Has Shown ''56-Inch Chest'': Anil Vij On IAF Strike
Health Minister Anil Vij told the opposition members that Prime Minister Narendra Modi has shown his "56-inch chest". He said PM Modi has shown the whole world that terrorism cannot be tolerated and those who sponsor it will also be taught a lesson.
Feb 26, 2019 15:45 (IST)
Actor-politician Kamal Haasan on IAF strike
"We have done what any self-respecting country would do. We are proud of what our forces have done for us. They are our shield, and they have behaved exactly like a shield. We are very proud. Salute to our fighters", says Kamal Haasan.
Feb 26, 2019 15:28 (IST)
Prepared "For All Eventualities": Imran Khan To Pak As India Hits Jaish Camp
Pakistani Prime Minister Imran Khan asks armed forces, citizens to "remain prepared for all eventualities" after India hits Jaish terror camp.
Read more here 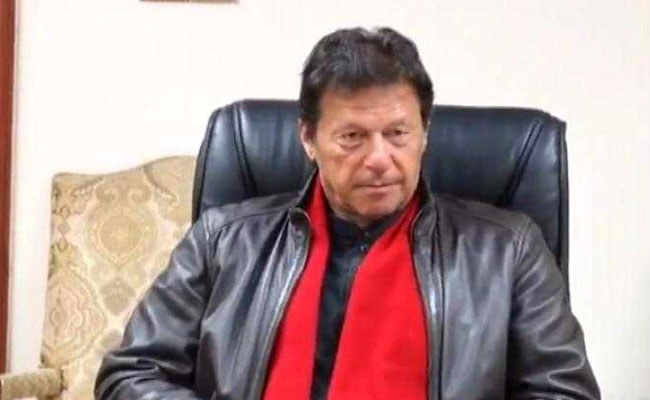 Today's strong action shows the will and resolve of a New India.
Our New India will not spare any acts of terror and their perpetrators and patrons.

Feb 26, 2019 13:21 (IST)
Lt General DS Hooda (Retired), who was the Northern Army Commander during the Surgical Strike in 2016, tells news agency ANI: "My compliment goes to the government for taking this action and also to the Air Force for the way they have carried out this strike (in Balakot) in an absolutely professional manner."
"All pilots are safe. I think it needed to be done. I personally had no doubt in my mind after Pulwama attack that some strong action will be taken by the government," he adds.
Feb 26, 2019 13:17 (IST)
Top government sources say "approximately 300 terrorists" were killed in the Air Force strike at Balakot, around 80 km from Pakistan Occupied Kashmir (PoK).
Feb 26, 2019 13:05 (IST)
What we know about the IAF strike so far:
Feb 26, 2019 13:01 (IST)
Pakistan Foreign Minister Shah Mahmood Qureshi says India has violated the LoC and Pakistan has a right to respond, according to news agency PTI.
"First, they committed aggression against Pakistan today. It is a violation of the LoC. I consider it a violation of the LoC, and Pakistan has right to give a suitable response in self defence," he said after an "emergency meeting" with high-level officials at the Foreign Office for consultations.
Feb 26, 2019 12:49 (IST)
India to brief major world powers about today's air strikes.
Feb 26, 2019 12:31 (IST)
National Security Agency (NSA) Ajit Doval along with Indian Army Chief Bipin Rawat and IAF Chief BS Dhanoa is reviewing the security situation on the borders after Indian Air Force strikes at JeM terror camps in Balakot across Line of Control, according to news agency ANI.
Feb 26, 2019 12:29 (IST)
What Political Leaders Said:
Punjab minister Navjot Singh Sidhu says in the war of right and wrong, you cannot afford to be neutral.

In the war of right & wrong,
You can not afford to be neutral,
The war against terror outfits is spot on...
Bravo Indian Air Force @IAF_MCC
Jai Hind 🇮🇳

Congratulations to #IndianAirForce pilots. I Salute your bravery.
The Nation is proud of you.
Jai Hind..🇮🇳#AirStrike

DMK chief MK Stalin has tweeted: "Proud of our #IndianAirForce pilots for their exceptional act of valor!"
Feb 26, 2019 12:13 (IST)
External Affairs Minister Sushma Swaraj has called a meeting at 5pm today, inviting Opposition leaders at Jawahar Bhawan (Ministry Of External Affairs) to brief them on India's action against Pulwama attack.
Feb 26, 2019 12:10 (IST)
Prime Minister Narendra Modi briefs President Ram Nath Kovind and vice-president Venkaiah Naidu after India carried out strikes across the Line of Control.
Feb 26, 2019 11:37 (IST)
Foreign Secretary Vijay Gokhale: It was a non-military pre-emptive strike
"On February 14, 2019, a suicide terror attack was conducted by Jaish-e-Mohammad in Kashmir. The JeM has been active in Pakistan for the last two decades. This organisation (JeM) which has been proscribed by the United Nations has been responsible for a series of terror attacks including the attack on Parliament in 2001," says foreign secretary Vijay Gokhale.
"India has struck the biggest training camp of Jaish-e-Mohammad in Balakote. A large number of JeM terrorists were eliminated."
"India has given proof many times seeking action against JeM and others at terror camps so big, that they can train hundreds of terrorists at any given time. But due to Pakistan's inaction, this step was necessary and had to be taken."
He says credible intelligence was received that Jaish-e-Mohammed was attempting another suicide terror attack in the country and terrorists were being trained for this purpose.
The facility in Balakote was headed by Maulana Yusuf Azhar alias Ustad Ghauri, brother-in-law of JeM chief Masood Azhar, he adds.
"It was a non-military pre-emptive strike."
"India is firmly and resolutely committed to taking all measures to fight the menace of terrorism. The selection of the target was conditioned to avoid civilian casualty. It (the camp) is located in a deep forest on a hilltop," he says. 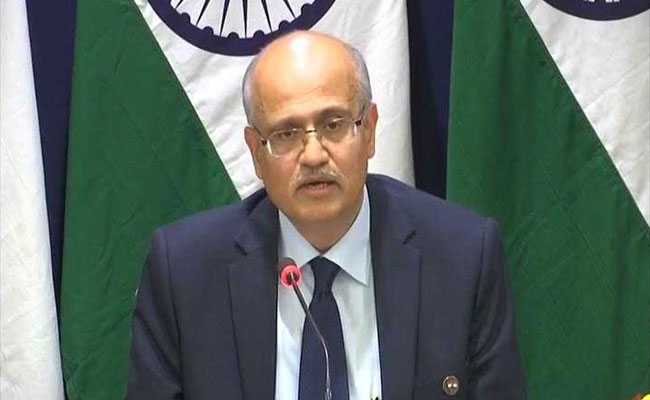 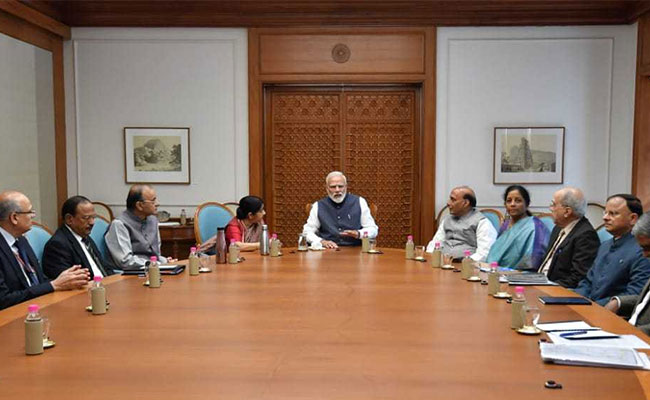 🇮🇳 I salute the pilots of the IAF. 🇮🇳

Feb 26, 2019 09:35 (IST)
Balakot, Chakothi and Muzaffarabad terror launch pads across the LoC have been completely destroyed in the Indian Air Force strikes, news agency ANI reported, quoting sources.
Jaish-e-Mohammed control rooms also destroyed, the ANI report said.
Feb 26, 2019 09:11 (IST)
Sources tell NDTV that the strikes were "100 per cent successful" and went on exactly as planned.
Feb 26, 2019 08:46 (IST)
Jammu and Kashmir National Conference chief Omar Abdullah says if it is true, this was not a small strike by any stretch of imagination.

Wow, if this is true this was not a small strike by any stretch of imagination but will wait for official word, should any be forthcoming. https://t.co/bOFt7SXl43

Feb 26, 2019 08:39 (IST)
The aircraft dropped 1,000 kg laser-guided bombs on major terror camps across the Line of Control, completely destroying it, news agency ANI reported, quoting Air Force sources.
Feb 26, 2019 08:38 (IST)
Jammu and Kashmir National Conference chief Omar Abdullah says: "The problem now becomes PM Imran Khan's commitment to his country - "Pakistan will not think about responding, Pakistan WILL respond". What shape will response take? Where will response be? Will India have to respond to Pakistan's response?"
Feb 26, 2019 08:35 (IST)
The strikes comes amid heightened tension between India and Pakistan after the February 14 terror attack by Pakistan-based Jaish-e-Mohammad that killed 40 CRPF soldiers in Jammu and Kashmir's Pulwama district.