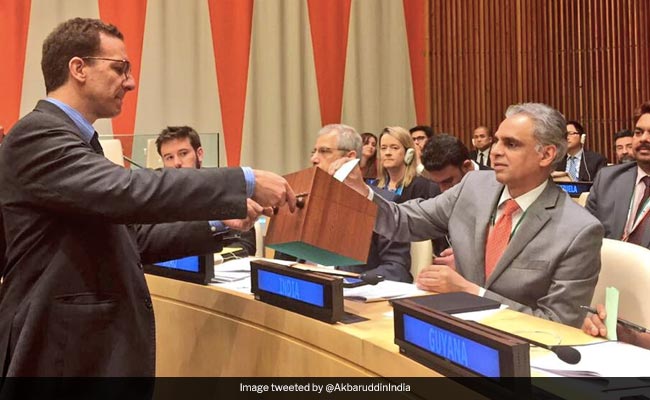 India topped the election to the Committee on Non-Governmental Organizations. (Twitter)

United Nations: India has won an election to a crucial non-governmental organisation committee in the UN after garnering the highest number of votes besides getting elected by acclamation to other subsidiary bodies in five separate polls.

The UN's Economic and Social Council (ECOSOC) held elections to a number of its subsidiary bodies in United Nations yesterday.

The ECOSOC focusses on advancing the three dimensions of sustainable development economic, social and environmental.

Following the elections, India's Permanent Representative to the UN Ambassador Syed Akbaruddin told PTI that the "results reflect, yet again, the broad support and many friends India has amongst UN members".

India topped the election to the Committee on Non-Governmental Organizations.

In one round of secret balloting, the Council elected Bahrain, China, India and Pakistan in the Asia Pacific States category and Brazil, Cuba, Mexico and Nicaragua (Latin American and Caribbean States) to serve a four-year term beginning on January 1, 2019.

India got the highest number of votes at 46, followed by Pakistan (43), Bahrain (40) and China 39. Iran lost the elections, having got only 27 votes. The Council elected by acclamation 11 other nations to serve the same four-year term.

India was also elected by acclamation to the Commission on Population and Development for a term beginning April 16, 2018 and expiring in 2021.

The Council elected India and Kuwait (Asia-Pacific States) by acclamation to the Commission for Social Development, filling outstanding seats for a four-year term beginning on the date of election.

The Commission's purpose was to advise ECOSOC on social policies of a general character and, in particular, on all matters in the social field not covered by the specialised inter-governmental agencies.

India was among the 17 members elected by acclamation to the Commission on Crime Prevention and Criminal Justice.

The Commission acts as the principal policymaking body of the UN in the field of crime prevention and criminal justice. Its mandate includes improving international action to combat national and transnational crime and the efficiency and fairness of criminal justice administration sytems.

Promoted
Listen to the latest songs, only on JioSaavn.com
For the Executive Board of the United Nations Entity for Gender Equality and the Empowerment of Women (UN-Women), the Council elected by acclamation 16 members, including India, for a three-year term beginning January 2019.