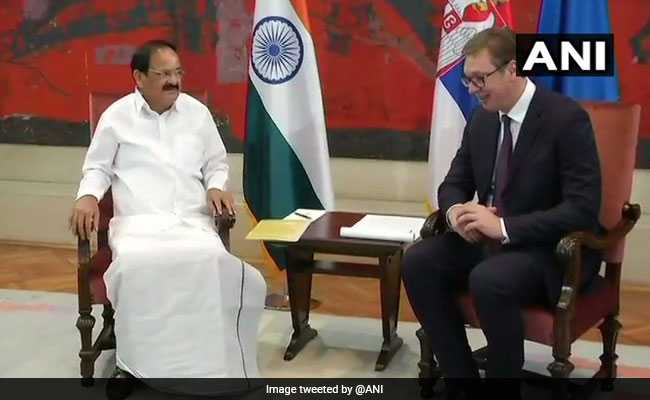 India and Serbia are marking 70 years of establishment of diplomatic relations.

Vice President Venkaiah Naidu on Saturday met Serbian President Aleksandar Vucic and discussed with him, ways of strengthening cooperation between the two countries in trade, defence and IT.

Mr Naidu, who arrived in Belgrade on Friday, was welcomed by Mr Vucic at the Serbia Palace.

During the visit, the two sides finalised agreement on cooperation in the field of plant health, quarantine and a revised Air Services Agreement.

The two leaders also discussed ways to strengthen economic cooperation and trade to expand the great potential of partnership between two countries, he said.

This year, India and Serbia are celebrating 70 years of establishment of diplomatic relations.

"I am glad that we will jointly release the postage stamp on two great personalities, Swami Vivekananda and Nikola Tesla," the vice president said.

Nikola Tesla was a Serbian American inventor and engineer who is best known for his contributions to the design of the modern alternating current electricity supply system.

On Friday, Mr Naidu interacted with the Indian community in Belgrade and asked them to be part of India's growth story