Seeking to boost bilateral trade from its current $11 billion, India and Russia announced deals in sectors including energy, defence and shipping 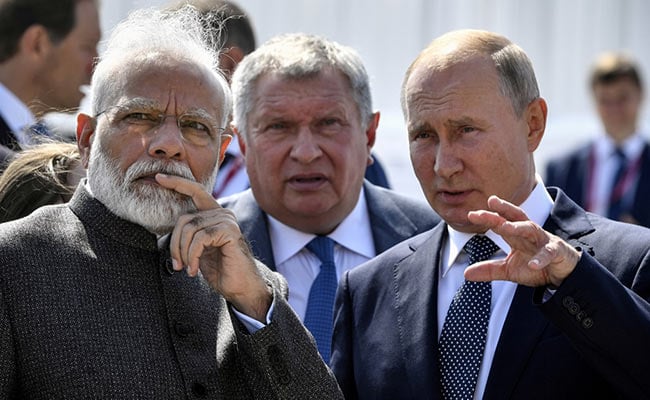 India and Russia are targeting $30 billion of annual trade by 2025, foreign secretary Vijay Gokhale said on Wednesday as a string of energy deals deepened economic ties between the nations.

Seeking to boost bilateral trade from its current $11 billion, the two countries announced deals in sectors including energy, defence and shipping after a meeting between Russian President Vladimir Putin and Prime Minister Narendra Modi at an economic forum in Vladivostok.

India, being the world's third-biggest oil consumer and importer, aims to raise the proportion of gas in its energy mix to 15% in the next few years and diversify its energy supply to hedge against geopolitical risk.

"We have had a major breakthrough in the energy sector. This is a sector where we are looking to diversify our sources of supplies and we are increasingly finding it attractive to buy oil and gas from the Russian federation," foreign secretary Vijay Gokhale, told a news conference.

"We are looking at investing in additional oilfields in Russia ... we are also looking at sourcing LNG," Mr Gokhale said.

Indian companies have stakes in Russian hydrocarbon assets including the Sakhalin-1, Imperial Energy, Vankor and Tass-Yuriakh fields, but it rarely imports oil from there because of logistical constraints and higher freight costs.

Among the deals announced on Wednesday, India's top gas importer Petronet LNG agreed to buy liquefied natural gas (LNG) from Novatek and invest in the Russian company's future projects. The two companies will also look at joint marketing of the gas as a motor fuel in India.

Coal India, meanwhile, signed a deal to mine coking coal in Russia's Far East, while private company H-Energy is looking at buying LNG from Novatek on a long-term basis.

Besides investing in each other's future LNG projects, Novatek and H-Energy plan to set up a joint venture to market Russain LNG in India, Bangladesh and other markets.

Gas company GAIL (India), which has a 20-year contract to buy LNG from Gazprom, is looking to acquire a minority stake in the Arctic LNG-2 project led by Novatek, Vedomosti business daily reported on Wednesday, citing Oil minister Dharmendra Pradhan.