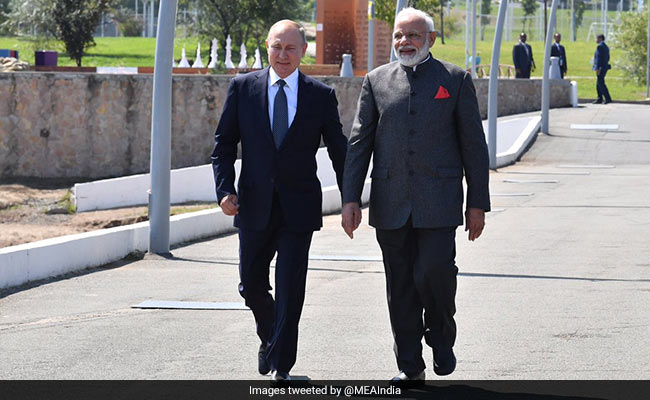 India and Russia on Wednesday agreed to open a maritime route between the ports of Chennai and Vladivostok to ensure connectivity between the two countries.

A Memorandum of Intent was signed between the Indian Ministry of Shipping and Russia's Ministry of Transport for the development of maritime communications between the ports of Chennai and Vladivostok in Russia's Far East Region after Prime Minister Narendra Modi's talks with Russian President Vladimir Putin.

PM Modi, who arrived in Russia on a two-day visit on Wednesday, is the first Indian prime minister to visit to the Russian Far East Region. He will also attend the Eastern Economic Forum (EEF) on Thursday.

"Opening of this route between Chennai and Vladivostok assumes significance because it ensures there will be connectivity between the two major ports which will give impetus to the cooperation between India and the Russian Far East," Indian Foreign Secretary Vijay Gokhale told reporters.

Gokhale said that India is looking not just at the energy sector in Russia but also the resources, forestry and agriculture sectors.

He said that Prime Minister Modi proposed and President Putin was also optimistic about manpower exports as Russia has a shortage of labour and "in this context the MoU on opening a route between Chennai and Vladivostok assumes significance."

The two leaders held the delegation-level talks at the India-Russia 20th Annual Summit after a two-hour tete-a-tete on board a ship, aimed at strengthening the special and privileged relationship between the two sides.