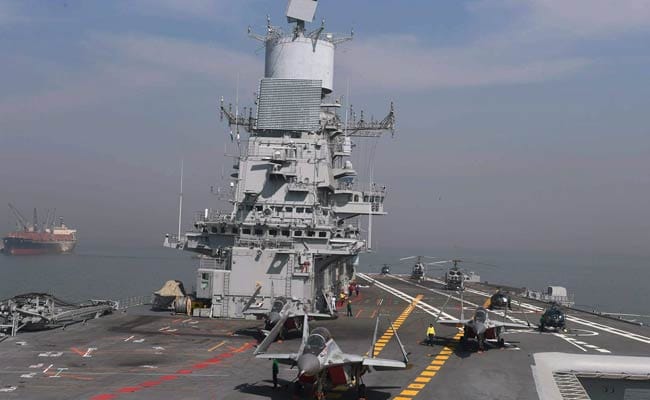 INS Vikramaditya during the Navy week celebrations in Mumbai on Friday. (PTI Photo)

New Delhi: The Indian Navy today said it was aware of the deployment and movement of Chinese naval ships and submarines in the Indian Ocean region, and that it has "kept a close eye" on them.

Addressing the annual 'Naval Day' news conference in New Delhi, Navy chief Sunil Lanba said a Chinese nuclear submarine was deployed in the Indian Ocean and it did a port call at Karachi harbour.

"As far as People's Liberation Army (PLA) Navy ships and submarines are concerned, the Indian Navy keeps a close eye and monitor their movements. We have maritime domain awareness of the deployment of PLA naval forces in the Indian Ocean region (IOR)... We launch surveillance missions in the form of aircraft and ships to keep a track of them. They had started deployment of their submarines from 2012," he said.

The Navy also termed as "bogus" the claims made by Pakistan that an Indian submarine had entered into territorial waters.

"There was no Indian submarine deployed in the area where the Pakistani Navy is claiming it to be. As far as repelling a submarine of any nation goes, it is not an easy task and the claim made by Pakistani Navy is totally bogus. We deploy submarines where there is an operational necessity and we will continue to deploy them," the Navy chief said.

The Pakistani Navy had last month claimed that it had prevented an Indian submarine from entering its territorial water.

The Chief of Naval Staff said India's primary area of interest was the IOR followed by Strait of Bab el Mandeb and the Strait of Hormuz.

In response to a question on Indian Navy's capabilities in the Pacific region, the Chief of Naval Staff said, "The Navy is well within its capabilities to operate in the region."

Mr Lanba also sought to downplay the Bangladesh Navy acquiring its first submarines from China, saying "India has a plan in place that takes into account what is happening in the neighborhood."

When asked about the South China sea dispute, the Navy chief said maritime issues should be solved as per United Nations Convention on the Law of the Sea (UNCLOS).

He added that the Kalavari Class Scorpene submarine will be commissioned next year.