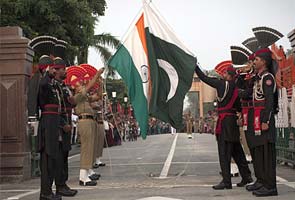 Lahore: India and Pakistan have beefed up security at the Wagah border crossing after receiving a letter from the banned Lashkar-e-Taiba (LeT) that threatened to blow up an Integrated Check Post that was recently opened to boost bilateral trade.

The letter warned that the multi-crore rupee Integrated Check Post would be attacked as Pakistan had increased trade with India before resolving the Kashmir dispute, the Daily Times newspaper quoted security sources as saying.

This information had been forwarded to the concerned authorities so that adequate security measures could be adopted, they said.

India's Border Security Forces, in cooperation with the Pakistani authorities, has tightened security at the Integrated Check Post and put rescue teams, ambulances and fire brigade vehicles on alert to deal with any emergency, the report said.

Mahboob Hussain, a spokesman for the Pakistan Rangers which is responsible for security along the border, told PTI that trade points at Wagah were under the army's control and security at these locations was "optimum".

Asked about reported threats from the LeT or any extremist group to sabotage trade between Pakistan and India at Wagah, Hussain said: "I am not aware of any threats".

He contended there was "no issue" with regard to security of ongoing trade between the two countries at Wagah.

Hardliners in the Defa-a-Pakistan Council, a conglomerate of over 40 extremist and religious groups cobbled together by LeT founder Hafiz Mohammad Saeed, have opposed the Pakistan government's efforts to normalise trade relations with India.

The reported LeT threat to the Integrated Check Post has come against the backdrop of several steps taken by the two countries to normalise trade relations, including Pakistan's in-principle decision to give India Most Favoured Nation status by the beginning of next year.
Comments
Wagah borderIndia Pak beef up security at Wagah borderTerror alert at Wagah border