The Janata Darbar saw massive response amid the presence of a large number of people from all walks of life from the entire Dhalai district. 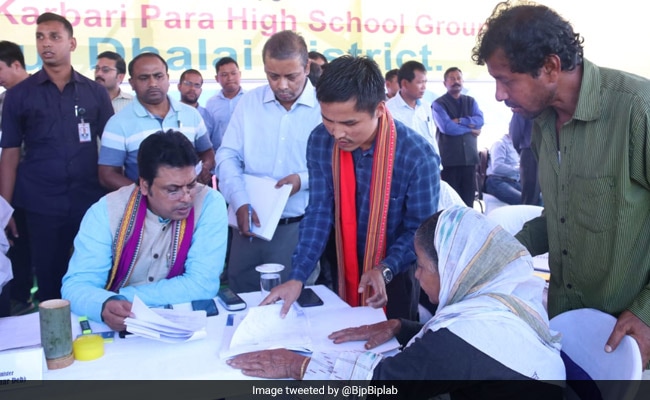 People who attended the Janata Darbar mostly talked about the issues related to roads, markets

For the first time in the history of the state, Tripura Chief Minister Biplab Kumar Deb on Saturday held a ''Janata Darbar'' programme to hear the grievances and demands of citizens in remote Chawmanu under Dhalai district.

The Janata Darbar saw massive response amid the presence of a large number of people from all walks of life from the entire Dhalai district.

People who attended the Janata Darbar mostly talked about the issues related to roads, markets, street lights and drinking water.

Some of them also raised issues relating to Pradhan Mantri Awaas Yojana while only a few people sought for employment and loan while some other citizens raised health-related issues.

The Chief Minister instructed the officials concerned to take immediate steps for resolving the issues highlighted by the people. Those who came to take part in the Janata Darbar expressed happiness over the Chief Minister's participation and said that they are hopeful that their issues will be resolved.

After the programme, Mr Deb told media, "Most of those who came here demanded better roads, schools, drinking water, electricity, houses. Some also came here for jobs or loan.

"Targetting the previous Left Front government, he said: "Those who were earlier habituated in taking a commission from the common people are now trying to frame story on the crisis of food and work because the old pattern had come to an end following the introduction of an online system."

"There was no complaint on crisis of food or work from anyone who came with their grievance at the Janata Darbar. The people, who always blamed the Union Government and deprive the people of Tripura for 25 years, claim about crisis of food and work," he added.

The Chief Minister said that the Centre has been facilitating all his demands for the state people's welfare. "There is no central deprivation. I don't need to stage dharna or protest for this. Earlier the same word- central deprivation was being used just to run their party politics," he said.

Emphasising on the Mahatma Gandhi Nationa Rural Employment Guarantee Act, he said that the allocation of person-days of work under MGNREGA has been increased from 3 crore to 4 crore annually.

In Chawmanu, the MGNREGA works were done three times more this time.