If India Has Chosen A Side, It Is The Side Of Peace: S Jaishankar On Ukraine

Replying to the discussion in Lok Sabha on the situation in Ukraine, Mr Jaishankar said India was the first country to evacuate its citizens and "served as an inspiration" to others. 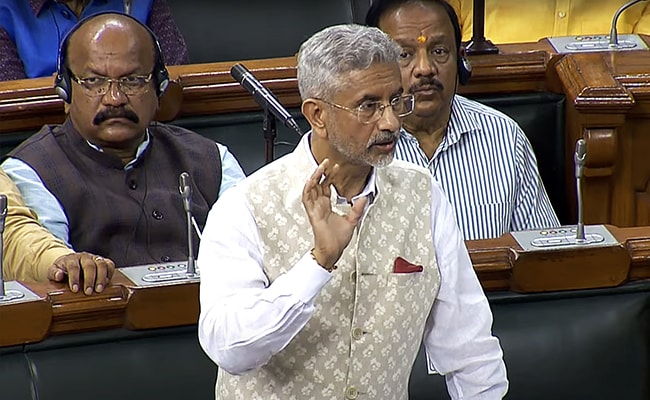 S Jaishankar said India encourages talks between Ukraine and Russia, including at the level of Presidents

Asserting that India is strongly against the Russia-Ukraine conflict, External Affairs Minister S Jaishankar on Wednesday said if New Delhi has chosen a side, it is the side of peace and for an immediate end to violence.

Replying to the discussion in Lok Sabha on the situation in Ukraine, Mr Jaishankar said India was the first country to evacuate its citizens and "served as an inspiration" to others.

He said India encourages talks between Ukraine and Russia, including at the level of their Presidents, and asserted that if New Delhi can be of any assistance in this matter, it would be "glad to contribute".

India's approach will be to promote dialogue to end the conflict, he said.

Talking about the civilian killings in the Ukrainian city of Bucha, Mr Jaishankar said India is "deeply disturbed" by the reports.

"We strongly condemn the killings that have taken place there. This is an extremely serious matter and we support the call for an independent investigation," he said.

Elaborating on what India is advocating in Ukraine, he said, "We are, first and foremost, strongly against the conflict, we believe that no solution can be arrived at by shedding blood and at the cost of innocent lives. In this day and age, dialogue and diplomacy are the right answers to any disputes." One should bear in mind that the contemporary global order has been built on the UN Charter, on respect for international law and for the sovereignty and territorial integrity of all states, he asserted.

"If India has chosen a side, it is a side of peace and it is for an immediate end to violence. This is our principled stand and has consistently guided our position in international forums and debates, including in the UN," Mr Jaishankar said.

In response to RSP member N K Premachandran drawing a contrast between advisories by the Indian embassy with that of other countries, he said the Western countries had a political approach and agenda.

Their advisories did not have have the same intent as ours -- welfare of community concerns, Mr Jaishankar said.

"When we left Sumi, along with us more non-Indian came out and they came out because of a ceasefire that we had arranged," he told the house.

"As an evacuation, we were the first. If individual citizens left? Yes, many of them did. Many of them left as part of the larger political plan their particular countries had," he said.

"In our case, there was nobody else who had done an evacuation before we did an evacuation. When fighting started, many countries said there is nothing we could do about it... you are stuck. When we evacuated, we served as an inspiration," Mr Jaishankar said.

He said some foreign ministers told him that they watched India and said they will also do something.

There is no reason for us to be extremely critical of what happened, he added.

Rebutting criticism that the government's actions in the matter were guided by assembly polls in five states, Mr Jaishankar said the prime minister in the middle of an election campaign came back to supervise the overall evacuation.

Elaborating on India's national strategy vis-a-vis the Ukraine situation, he said that in terms of diplomacy, India continues to press forcefully for an immediate cessation of hostilities and an end to violence.

"We encourage talks between Ukraine and Russia, including at the level of their presidents. Prime Minister (Narendra Modi) himself has spoken to them both in this regard. This was precisely the message that was conveyed to Russian Foreign Minister Sergey Lavrov when he was in Delhi. If India can be of any assistance in this matter, we would be glad to contribute," Mr Jaishankar said.

Noting that the ground situation calls for an urgent humanitarian relief, he said India has already provided 90 tonnes of relief material, and did so even while we were in the middle of an evacuation.

"Ukrainian deputy Prime Minister called me a few days ago to request a supply of more medicines, the House would be glad to know that this is underway and delivery should start very soon," he said.

"We will work with the international community and partner countries to mitigate the economic hardships that are resulting from this conflict. Obviously our focus is to soften its impact on our own economy but equally there are partners who are going through very tough times. Coordinating on lowering energy prices is one collective initiative," he said, adding that in the case of a neighbour like Sri Lanka "we are even supplying fuel and food on credit".

Asserting that food security is another major concern, he said India has been approached for the supply of wheat and sugar by many countries and it is responding positively.

"At a time when energy costs have spiked, clearly we need to ensure that the common person in India is not subject to an additional and an unavoidable burden. Similarly, fertilizer prices have a direct implication for the livelihood of a majority of our population and indeed for food prices for all of us. Even the security of the nation is at stake as we maintain our defence posture in the manner that the current security challenges warrant," he said.

"All these are legitimate pursuits of national interest by India. They are similar to what other nations are doing from their particular perspective. Attributing a political colouring to it is uncalled for and it is unfair," he said.

He also hailed the role played by the four ministers -- Jyotiraditya Scindia, Hardeep Singh Puri, Kiren Rijiju and Gen (retd) V K Singh -- who had gone to countries neighbouring Ukraine, saying India would not have got same level of cooperation, had it not been there for their presence.

Talking about the changing world order, Mr Jaishankar said, "To my mind the solution is we have to be stronger, we have to reduce our dependency on the external world, it cannot be total.