Surat Coaching Fire: Gujarat coaching centre fire: The fire broke out on the third and fourth floor of a building called Takshashila Complex in Gujarat's Surat.

At least 20 people, mostly students, were killed after a massive fire broke out at a coaching centre in Gujarat's Surat on Friday afternoon. Videos posted by witnesses on social media showed several students jumping out of windows on the top floor of the four-storey building to escape the blaze.

Most of the students are said to be between the ages of 14 and 17. "The fire started near the staircase, so they could not get down," Joint Commissioner of Police Harikrishna Patel said

Disturbing visuals showed people on the pavement asking the students to jump off the burning building, hoping to catch them. Among those seen falling was a young child. "Some of these students are critical but the crowd managed to save their lives," Darshana Jardosh, the parliamentarian from Surat, told NDTV.

The fire, which broke out at around 3:30 pm, engulfed the top two floors of the commercial building called Takshashila Arcade in the Sarthana area of Surat, officials said. About 50 or 60 people were inside when the fire broke out, covering the area in huge plumes of smoke.

The fire was likely caused due to an electrical short circuit, Mr Patel said. A video showed an electrical box of high-voltage cables outside the building on fire. An FIR (First Information Report) has been filed against the owner of the building, the person who conducted the class and the man who constructed the building. They are on the run.

Officials told news agency AFP that the fire spread quickly because of the material used in the roof of the building. It did not have a functioning fire escape. 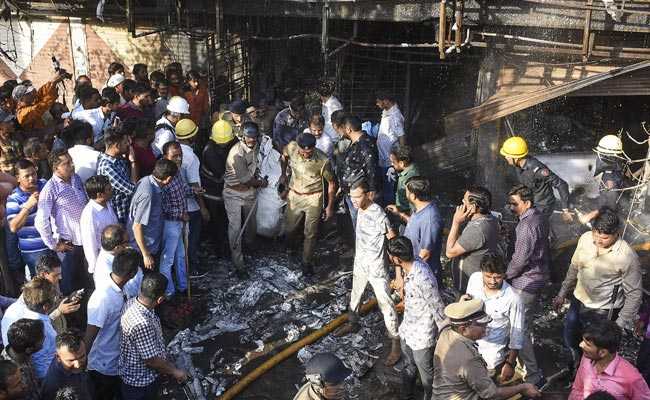 Surat coaching centre fire: The fire broke out around 3:30 pm

A fire official said 19 fire engines were sent in to tackle the fire. "The toll has jumped to 19 and includes 16 females. Sixteen persons died because of burns and three others from injuries after they jumped," Jayesh M Patel, medical officer at Surat Municipal Institute of Medical Education and Research, told AFP.

An investigation has been ordered into the incident and a report expected in three days. The state government has also ordered a fire safety audit of all schools, colleges and coaching centres in the state. It has promised to give Rs 4 lakh to each of the families of those killed.