How Delhi Airport Has Prepped For Vaccine Distribution

COVID-19 Vaccine: New Delhi's airport -- Indira Gandhi International -- will be a main handling point and has facilities to store 2.7 million vials of vaccine at 2-to-8 degrees Celsius, as well as cooling chambers that can keep temperatures as low as minus 20 degrees Celsius, Jaipuriar said. 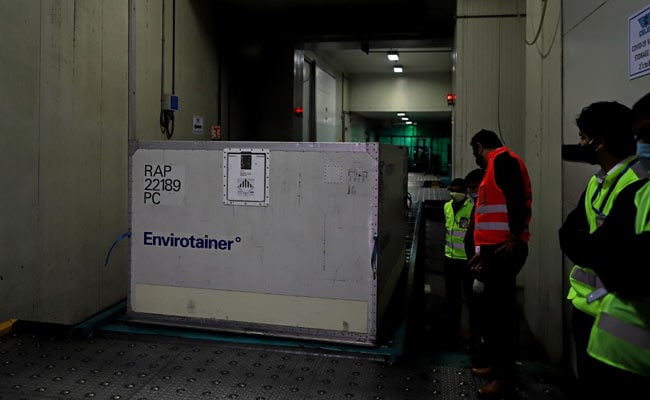 Workers transport an Envirotainer, a temperature-cooled container, at the airport.

Distributing vaccines around India will pose plenty of logistical headaches given the size of the country, its vast population and number of coronavirus cases, now at more than 10 million.

For its part, India's busiest airport is "completely ready" to handle Covid-19 vaccines, according to Delhi International Airport Ltd. Chief Executive Officer Videh Kumar Jaipuriar, but there could be issues elsewhere considering more remote areas may not be equipped with sufficient equipment and containers. "One of the key challenges will be the availability of cold chain across India," he said.

New Delhi's airport -- Indira Gandhi International -- will be a main handling point and has facilities to store 2.7 million vials of vaccine at 2-to-8 degrees Celsius, as well as cooling chambers that can keep temperatures as low as minus 20 degrees Celsius, Jaipuriar said.

"As soon as we get an indication on what's going to be the flow, we will do the final tune up and then we will be ready to go," Jaipuriar said in an interview with Bloomberg News during a tour of the airport's facilities on Dec. 22. He said there was also capacity to potentially export vaccines to nearby countries.

India is relying largely on two domestically made vaccines from Bharat Biotech International Ltd. and the Serum Institute of India Ltd., which has partnered with AstraZeneca Plc to produce at least one billion doses. Ultra-cold storage requirements for Pfizer Inc.'s shot make it an unlikely choice for widespread use given India's patchy health networks and infrastructure, especially in rural areas where the bulk of the country's nearly 1.4 billion people live.

According to Bloomberg's Covid Resilience Ranking, a measure of the best places to be in the Covid-19 era, India is a long way down the list, ranked No. 39 out of 53 economies in December, below even the U.S. and Brazil. New Zealand -- with its closed borders, vaccine deals and elimination of the virus in the community -- remains No. 1.

India, along with China, the world's most-populous nation, both slipped in the ranking versus November. While both countries have secured over two billion shots with multiple developers, that's less per capita coverage than many smaller places.

"This is a huge logistics exercise that needs to be worked out in detail for the vaccine to reach every nook and corner," Jaipuriar said.