Himachal Pradesh to Get More Snowfall Next Week 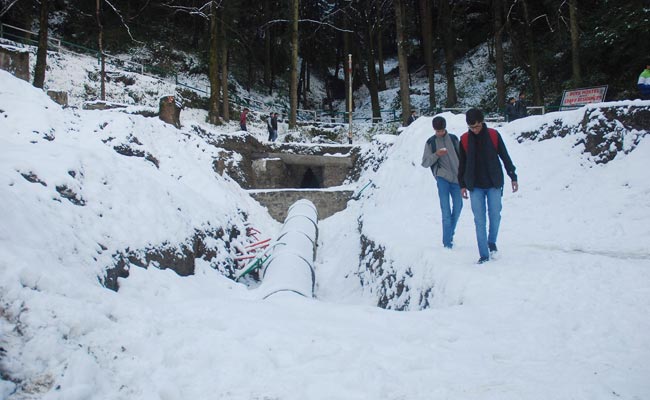 People walk down a snow-covered road after snowfall near Shimla. (PTI Photo)

Shimla:
The hills of Himachal Pradesh, which saw snow and rain in the past four days, would be in line for more precipitation next week, said the Indian Meteorological department (Met).
"The western disturbances will be quite active in the Himalayan region and its adjoining plains from Feb 23, which would ultimately bring more rainfall and snowfall," a Met official told IANS.
"There are chances of widespread rain and snow from Feb 24-25 and most of the prominent tourist towns like Kufri, Narkanda, Manali and Kalpa may get more snowfall,"he said.
Kalpa, some 250 km from the state capital was the coldest place in the state with the temperature as low as minus seven degrees and received 34 cm snow in the past 24 hours.
Shimla recorded a minimum temperature of 5.7 degrees, Keylong in Lahaul-Spiti recorded 4.3 degrees, Manali minus 2 degrees, Dalhousie 2.6 degrees and Dharamshala recorded 6.8 degrees.
Promoted
Listen to the latest songs, only on JioSaavn.com