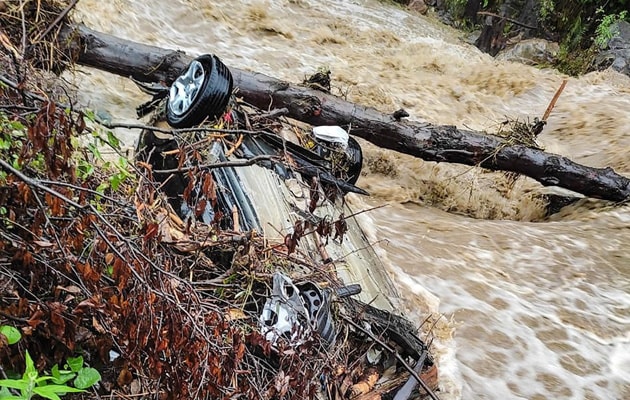 In Kullu, a 26-year-old woman, Poonam, and her four-year-old son Nikunj were swept away in Brahamganga, a tributary of the Parvati river, near Manikaran around 6:15 am on Wednesday due to a sudden surge in the water level, he said.

Another woman and a man were also swept away in the flash floods, he added.

In Lahaul's Udaipur, two tents of labourers and a private JCB were washed away in the flash floods triggered by a cloudburst around 8 pm on Tuesday, Mr Mokhta said.

Three people were killed and seven labourers are still missing, he said.

He said police and Indo-Tibetan Border Police (ITBP) teams were dispatched to search for the missing people but the heavy flow of water hampered the search operation on Tuesday night. The search operation resumed on Wednesday morning.

Lahaul-Spiti Deputy Commissioner Neeraj Kumar told news agency PTI that a team of the National Disaster Response Force (NDRF) has been requisitioned for rescuing the labourers trapped under the debris of the landslide.

"The NDRF team is on its way and is likely to reach the spot by afternoon," he said.

The district administration is arranging the necessary equipment at the spot for a prompt rescue operation by the NDRF, he added.

In Chamba, a JCB helper was washed away in the flash floods in Chaned tehsil, Mr Mokhta said.

In Lahaul-Spiti, several roads have been blocked and around 60 vehicles are stranded due to multiple landslides, he said.

Many roads in various other parts of the state have been blocked due to landslides. A car was damaged in a landslide in Vikas Nagar in Shimla city, he said.

On Tuesday, several people were evacuated from Lahaul-Spiti's Darcha village after water levels rose in the Bhaga river following a heavy spell of rain, Mokhta said.

According to the Darcha police check-post, the water level in the river increased considerably due to the heavy rainfall, damaging three shops near the river bank.