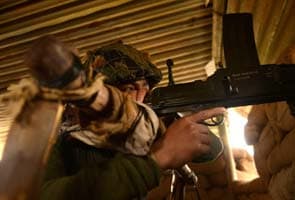 Srinagar: Two Pakistani soldiers have been wounded - or possibly killed - in an exchange of machine gun fire between Indian and Pakistani troops in the Uri sector of northern Kashmir.

The Indian Army has reported heavy ceasefire violation by Pakistani troops in the sector on Tuesday afternoon, hours after five Indian soldiers were killed by about 20 heavily armed Pakistani soldiers and terrorists who crossed the border in Poonch, 200 km from Srinagar.

Army sources said Pakistan opened indiscriminate fire on three Indian posts in Kamal Kote area of the Uri sector in Baramulla district of Jammu and Kashmir yesterday afternoon. In the firing, that lasted nearly one hour, there were no casualties on the Indian side.

Reuters has quoted a Pakistani military official as blaming "unprovoked Indian firing" for injuries to the two Pakistani soldiers. He said that senior army commanders on both sides had spoken over a special hotline after the border skirmish.

The official, Reuters said, spoke on condition of anonymity because he was not authorised to discuss operational issues with the press.

On the intervening night between Monday and Tuesday, five Indian jawans were ambushed and killed; a sixth managed to escape with serious injuries and is now in hospital.

Promoted
Listen to the latest songs, only on JioSaavn.com
Repeated ceasefire violation by Pakistan is threatening to derail the resumption of peace talks between the two countries. Bilateral ties have been at a low especially since January when an Indian soldier was beheaded at teh border by Pakistani soldiers.

Pakistan has proposed a high-level meeting with Indian officials to restart the dialogue process. New Pakistani Prime Minister Nawaz Sharif made improving trade with India a central plank of his campaign. But with elections looming in India, many are questioning whether the incumbent government can make concessions without being painted as weak by the opposition, which has slammed it for what it calls a soft policy on the issue.