Police said that travel time from starting point and destination will be evaluated and a video (of the incident) will be examined. 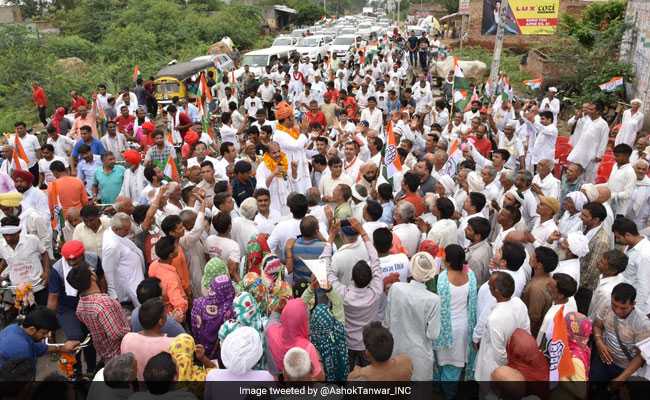 Congress leader Ashok Tanwar said that the cause of death was not traffic jam but traffic negligence.

A four-member Special Investigation Team has been constituted to investigate the incident where an infant died in Sonipat on Wednesday.

The infant died en-route a hospital in an ambulance. The relatives of the child allege that a massive traffic jam, caused by Congress leader Ashok Tanwar's 'Haryana Bachao Pariwartan Lao' rally in the city, was responsible for the delay, which resulted in the infant's death in the ambulance.

Speaking to ANI, the Additional Director General of Police, AS Chawla said, "In the FIR, the complainant mentioned about the rally without naming anyone. A SIT has been constituted to investigate the case. Travel time from starting point and destination will be evaluated and a video (of the incident) will be examined."

"The Chief Minister ordered an investigation by Superintendent of Police (SP) Rohtak. I have ordered the Directorate General of Health Services to file a report today after a preliminary investigation. We will take strict action in the case," Mr Vij said.

An FIR has been lodged in the case under Section 304A and 177 (Motor Vehicles Act) at a police station in Kundli.

Mr Tanwar, however, denied that the cause of death was the traffic jam due to his rally and instead pinned the blame on the hospital's negligence.

"I have a video of his father wherein he has said that the incident happened because of the hospital's negligence. He was there (hospital) for 12 hours but did not receive any medical facilities. The family was later referred to civil hospital and then to Rohtak," Mr Tanwar told news agency ANI.