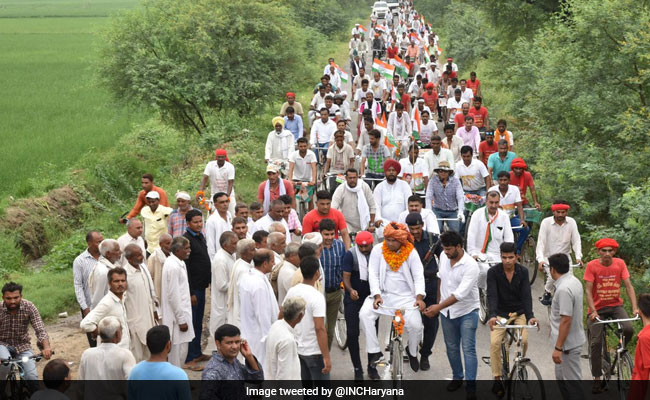 Ashok Tanwar blamed the hospital for the infant's death (File)

An infant died on the way to a hospital in Haryana's Sonipat on Wednesday after the ambulance it was travelling in got stuck in a traffic jam, allegedly caused due to a cycle rally organised by Congress leader Ashok Tanwar. The state government has ordered an inquiry into the incident.

Taking cognizance in the matter, Haryana Health Minister Anil Vij said in an official statement that "stopping an ambulance in any condition is intolerable and inhuman".

"It has come to notice that during the cycle rally, the Congress party workers were dancing in front of the ambulance, thus causing obstruction to it for long time due to which the new-born died. This is a serious matter, and those found guilty would not be spared," he added.

Mr Tanwar, however, blamed the hospital for the infant's death. "I have a video of his father in which he stated that the incident happened because of the hospital's negligence. He was there (hospital) for 12 hours but did not receive any medical facilities. The family was later referred to civil hospital and then to Rohtak," he said.

Expressing grief over the incident, Mr Tanwar said the party workers helped clear the way for the ambulance.  "When our people came to know that there is an ambulance stuck in traffic, they cleared the road. The government, local administration and police should take responsibility. Also, there was no nurse, doctor or proper oxygen supply given to the child," he added.

Mr Vij informed about the Chief Minister's decision. He said,"The Chief Minister ordered an investigation by Superintendent of Police, Rohtak. I have ordered Directorate General of Health Services to file a report after a preliminary investigation. We will take strict action in the case."