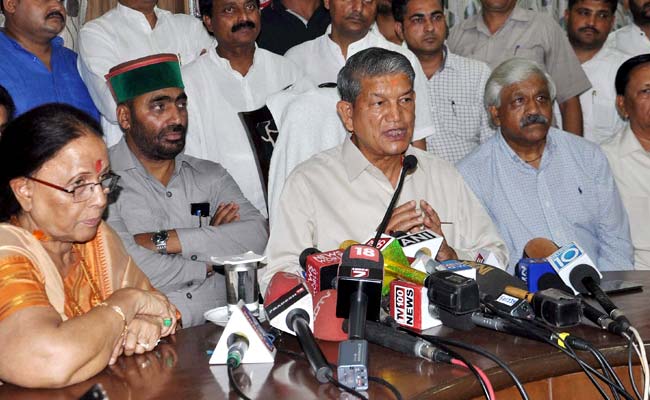 Harish Rawat said he was "confident" about winning the trust vote in Uttarakhand on May 10. (File Photo)

Dehradun: Ousted Uttarakhand Chief Minister Harish Rawat today alleged that central agencies were being misused to "harass" legislators and leaders, who were being threatened and their phones were getting tapped ahead of the trust vote in the state Assembly on Tuesday.

"Our MLAs and leaders are getting threatening messages from conduits who are posing as relatives, well-wishers and acquaintances," Mr Rawat told reporters in Dehradun.

"I am also being kept under surveillance as if I am an anti-national," he alleged.

Mr Rawat alleged that his phones and those of his relatives and aides were being tapped. "Central agencies are harassing Congress people through various ways," he alleged.

"Central agencies are openly being misused and not only my MLAs but political leaders are being threatened," he said.

His allegations came on a day another video of a purported sting operation was released allegedly involving Mr Rawat and he was accused of indulging in horse-trading.

Asked about the video, Rawat said that he had no information about it as of now.

The Congress leader voiced confidence that he will win the trust vote which will be held on May 10 following the direction of the Supreme Court.

The top court was hearing the Centre's petition challenging the revoking of President's rule by the Uttarakhand High Court on Mr Rawat's plea.

He also alleged that Mr Bahuguna and former Congress leader Bhupesh Upadhyaya's wife were involved usurping land of the displaced people of Tehri and demanded a high-level probe into the matter.
Comments
UttarakhandUttarakhand CrisisHarish RawatTrust Vote

Delay In Recruitment Amounts To Injustice To Youth: Priyanka Gandhi