The video shows Madhya Pradesh Energy Minister Pradyuman Singh Tomar snatching the Congress flag from a party worker, after which the two can be seen pushing and shoving each other. 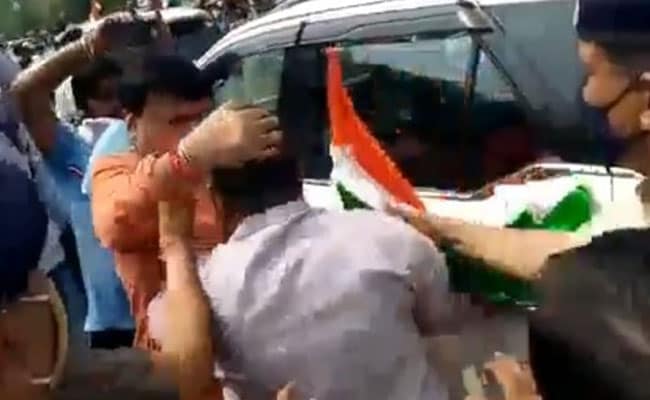 If not for a handful of people wearing masks, it would be difficult to tell that the incident on video is taking place in the middle of a global pandemic triggered by a highly-contagious virus.

Forget six feet of social distancing, one would be hard-pressed to find an inch of gap in the frame as a Madhya Pradesh minister and his entourage are seen in a vigorous dust-up with a Congress worker in Gwalior's Phool Bagh area.

At that time, some Congress workers also came to the spot to protest against the removal of the party's hoardings by the local civic body.

The video shows Mr Tomar snatching the Congress flag from a party worker, after which the two can be seen pushing and shoving each other.

The Congress workers were protesting against the removal of hoardings and banners put up to welcome state party chief Kamal Nath, who is scheduled to arrive here on September 18.

Senior police officer Satyendra Singh Tomar said when the minister came to Phool Bagh to take a memorandum, a couple of protesting Congress workers came near him.

"The security personnel took these protesters away and took the minister safely ahead to enable him to accept the memorandum," he said, adding that no case was registered in connection with the incident.

The minister later said, "Congress workers created disorder in bid to reach the spot. But this will not deter a public servant. Kamal Nath, during his 15-month long tenure as chief minister, did not give even 15 minutes for Gwalior."

He accused the previous Congress government of not sanctioning funds for hospitals here.

"Now, the Congress is spending crores on advertisements and hoardings," the minister alleged.

After the incident, former minister and Congress MLA Lakhan Yadav and Congress candidate from Gwalior Sunil Sharma staged a dharna at the site.

"The posters-banners of the Congress are being removed due to fear of BJP leaders and ministers, but the common people are with us. How will the BJP take them away?" Mr Sharma asked.