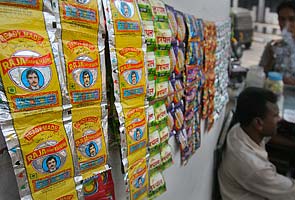 New Delhi: Chewing tobacco, like gutka and paan masala, has been included among banned "food products" in the government's new food safety guidelines. The move has been welcomed by health activists.

Coming close on the heels of a ban on the usage of plastic pouches to package chewing tobacco and pan masala, the Food Safety and Standards Authority of India (FSSAI) under the health ministry issued a notification prohibiting tobacco to be used as an ingredient in any food product.

The food safety notification which was announced in early August says: "Product not to contain any substance which may be injurious to health. Tobacco and nicotine shall not be used as ingredients in any food product."

Clearing the air about terming tobacco as a food product, V.N. Gaur, director of FSSAI, said that chewing tobacco, like gutka or pan masala, can be called food because it is consumed like any other food product.

That gutka and pan masala can be termed as food product was also affirmed by the Supreme Court. In the Ghodawat Pan Masala case, the apex court said: "Since pan masala, gutka or supari are eaten for taste and nourishment, they are all food within the meaning of Section 2(v) of the Act."

Welcoming the step, health activists said that the guidelines will act as a deterrent to the "non-smoking tobacco industry".

"The current notification which defines tobacco as food and bans it is a welcome step. It's only logical that things like gutka or pan masala which can be chewed and digested like any other food item is termed as food," Bhavna Mukhopadhyay, executive director of the Voluntary Health Association of India (VHAI), told IANS.

This, she added, could deal a blow to the Rs.8,000 crore worth gutka industry in India.

Added Rajeev Sharma, a health activist who mobilises youth groups to campaign against smoking: "The notification is definitely a good step. But for it to really mean anything, the government should ensure a strong and effective implementation".

Mukhopadhyay said: "The notification however should have gone one step forward instead of just saying that tobacco should not be used as a food ingredient. It seems to wash its hands of the implementation bit... the government should put in place a mechanism by which it is implemented."

One way of implementing the directive better is spreading awareness, she said.

To illustrate the ineffective implementation of rules, she pointed out that despite the Supreme Court's order banning the sale of chewing tobacco and other pan masala products in plastic packets, it is openly being done.

The president of Smokeless Tobacco Federation (India), Sri Gopal, said that the industry suffered a loss of 40 percent after the ban on plastic packages came into effect.

"Paper packaging of tobacco products has cost us a fall of 40 percent in business," Gopal said.

Promoted
Listen to the latest songs, only on JioSaavn.com
He, however, refused to acknowledge the latest notification by the FSSAI.

"The Tobacco product industry is not governed by the Prevention of Food Adulteration (PFA) or the FSSAI," he said, thereby putting a question if the notification will actually change anything or is just a string of words on paper.