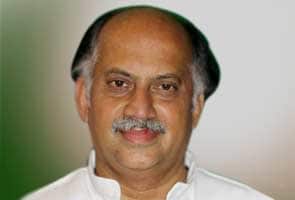 New Delhi: Gurudas Kamat, one of the Congress' heavyweight leaders from Maharashtra, has resigned because he was unhappy with the cabinet reshuffle. Mr Kamat had been warned by his party that if he skipped today's swearing-in ceremony, he would have to exit as minister. He obliged on both counts.

Mr Kamat was given independent charge this morning as Minister of State for Drinking Water and Sanitation. He was reportedly upset that he had not been given a Cabinet rank.

However, in a press release, he said, "There is no question of any disappointment over the Portfolio, which is itself an important one, with concerns related to requirements of a large sections of the people of the Country. The reasons are totally personal and not any defiance of the Party Leadership as is being made out in certain sections of the media." (Read: Gurudas Kamat's letter to Sonia Gandhi, PM)

Mr Kamat is from Mumbai. The ministry he was assigned to today has been carved out of the Rural Development Ministry.

Congress sources told NDTV that if Mr Kamat acted unreasonably, then the party does not need to react and that his move won't help the party in Mumbai.

Another Congressman, Srikant Jena, who is from Orissa was also upset about not being given Cabinet rank.

Promoted
Listen to the latest songs, only on JioSaavn.com
Mr Jena has been made Minister of State with Independent Charge of Statistics and Programme Implementation.

Mr Jena weathered the pro-BJD wave in the 2009 Lok Sabha elections to win the Balasore Lok Sabha constituency; he was among six Congress leaders from the state to be elected to Parliament.