After tests, it was found that the Covid survivor had contracted Green Fungus - an infection that had earlier been seen only as a "junior partner" in other cases, the senior doctor said. 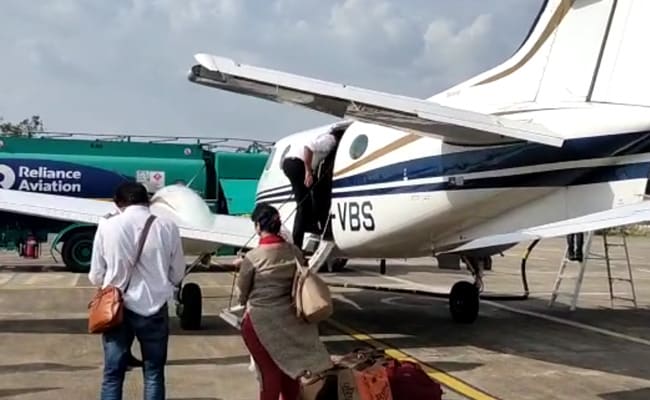 Green Fungus case: The 34-year-old patient has been airlifted to Mumbai for treatment

A Covid survivor in Madhya Pradesh has been infected with 'Green Fungus' - possibly the first such reported case in the country, a senior doctor told reporters. 'Green Fungus' is the newest infection to join earlier reported cases of black, white and yellow fungus even after AIIMS chief Randeep Guleria warned against creating "confusion" with fungus colours last month.

The newest disease is an Aspergillosis infection, and more research was needed on the fungus, Dr Ravi Dosi, the head of the Department of Chest Diseases at Sri Aurobindo Institute of Medical Sciences (SAIMS) in Indore said.

Aspergillosis is a relatively uncommon infection and affects the lungs.

The 34-year-old patient, who battled Covid for two months before experiencing severe nosebleeds and fever, was suspected to have contracted the deadly Black Fungus or mucormycosis.

However, after tests, it was found that he has contracted 'Green Fungus' - an infection that had earlier been seen only as a "junior partner" in other cases, Dr Dosi said.

He added that the fungus, that is acting as an aggressor in possibly the first reported case in the country, has affected the patient's lungs, sinuses and blood.

Possibly the first patient detected with Green fungus, in Indore and shifted to Mumbai by air ambulance for treatment. He recovered from COVID-19 recently but underwent a test on suspicion that he had contracted black fungus! pic.twitter.com/Anys2ciXab

"The patient underwent Covid treatment for around two months. He went home and around 10-15 days started experiencing nosebleeds and fever. He came in for tests and we found that he is infected with 'Green Fungus'," Dr Dosi said.

The doctor added that the medication for 'Green Fungus' is different from Black Fungus. He also added that 'colour coding' of the various types of viruses must be done.

AIIMS Delhi chief Dr Guleria had last month warned against the "confusion" created by giving fungal infection different colours based on how they infected the body after reports emerged of the first case of 'Yellow Fungus' in the country.

"Naming the same fungus based on its colours, depending on the area of infection, creates confusion," he said.

Black Fungus - the first of the coloured infections to be reported - is rare but is potentially fatal and has been declared an epidemic.

Doctors say Black Fungus can affect the face, the nose, the orbit of the eye, or brain, which can cause even vision loss. It can also spread to the lungs.